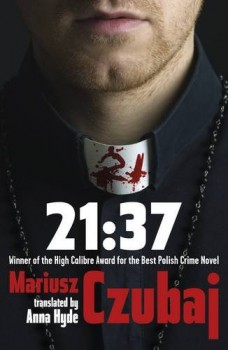 Criminal profiler Rudolf Heinz is called in when two bodies marked with ritualistic signs are found in Warsaw, but enjoys little cooperation.

Police Commissioner Rudolf Heinz is a criminal profiler and is called in when the bodies of two young seminarians are found in Warsaw, with plastic bags over their heads marked with pink triangles and the numbers 21:37.

Heinz does not get full cooperation from the police team assigned to him, nor from the Father Chancellor of the seminary and his key personnel, but that he can make any progress is surprising; he remains haunted by an old antagonist who continues to taunt him, and his close personal relationships are a mess. Nevertheless, despite all his problems he resolves a case back in his home town of Katowice and stirs up things in Warsaw, putting pressure on people he knows have something to hide.

21:37 was first published in Poland in 2008 and won an award. In translation it possibly fails to have the same appeal. The prose comes across as somewhat clunky, with odd phrases that he reader needs to re-examine to verify the sense.

There is, however, a lot about Heinz which is recognisable. He drinks and smokes too much, eats irregularly, sleeps badly, insults pretty well everybody around him, and as with many fictional detectives is dysfunctional in areas not directly related to his work. As far as the latter is concerned he is seemingly poorly organised but supposedly has a penetrating insight, only partly from training and experience. Suffice it to say that this is not altogether fully demonstrated; the eventual solution to the main plot is unforeseen and somewhat random. Mariusz Czubaj adds depth to Heinz’s character with two particular enthusiasms: karate and blues (encompassing heavy rock, for those who are interested).

Given Heinz’s professional specialisation, it is understandable that his preoccupations would be fairly dark; however there is little relief in the noir and even the humour is cynical. The legal system is corrupt, money talks, senior police want nothing more than early closure and the lower ranks (including the protagonist) are undisciplined and happy to use threats and violence to get results. The church is no better: the seminary is full of sexual predators and flagellants. This is a book perhaps best enjoyed by those with few illusions about human nature.