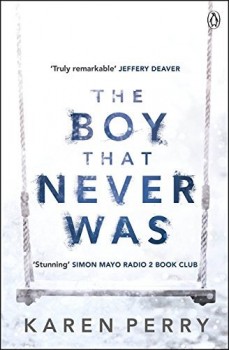 The Boy That Never Was

Three-year-old Dillon was lost when an apartment block in Tangier was swallowed up by an earthquake, so when Harry thinks he sees his son on the streets of Dublin five years later, he’s elated. But will anyone believe him?

There’s something both compelling and poignant about any story that has a missing – presumed dead – person at its heart, and that feeling only intensifies when the person concerned is a child.

Five years ago, three-year-old Dillon was left alone for a few minutes in an apartment in Tangiers. Most parents have done it at some point, even after the publicity surrounding Madeleine McCann’s disappearance, but what Dillon’s father Harry didn’t expect in the time he dashed out to retrieve the anniversary present for his wife that he’d accidentally left at a friend’s house was for his entire apartment block to be swallowed up in a massive earthquake, taking Dillon with it.

Still grieving for their lost child, Harry and his wife Robin return to their native Ireland, Harry to continue as an artist, while Robin works as an architect.  Their once close marriage is under strain. Neither of them has ever forgotten their son. Indeed, they still celebrate his birthday every year, and it soon becomes clear that Harry in particular has never really accepted that his son died in the wreckage of the building, especially as his body was never found.

Then when Harry catches a glimpse of a child in the midst of the Dublin crowds he becomes convinced that he’s seen Dillon, and that the boy definitely isn’t dead, but something holds him back from telling Robin. He wants to be sure that it really was his son.

The Boy That Never Was is a thoroughly engrossing psychological thriller that skilfully builds on its original premise, drawing you deeper and deeper into the lives of Harry and Robin, whilst subtlety and convincingly turning upside down everything that they – and you – believe to be true.

The chapters are told from the alternating perspectives of the main characters – not an easy trick to pull off, as differentiating the protagonists when both stories are told in the first person can be problematic. But Karen Gillece and Paul Perry – writing as Karen Perry – pull this off remarkably well in their debut collaboration.

I was entirely immersed in this haunting tale of loss, secrets and obsession in which nothing is ever quite what it seems. There are times when all psychological thrillers seem to cheat a little, but that’s kept to a minimum here, and remains within the bounds of possibility. And what’s always important is deft characterisation, and this writing partnership has a very light but sure touch with their creations. Nothing is laboured or heavy-handed, but you’ll soon find yourself thoroughly immersed in the story of any parent’s worst nightmare.