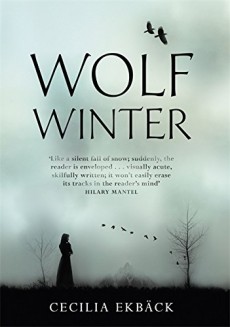 Finnish immigrant Maija and her daughters are left alone on a grim mountain. The girls find a murdered man, but locals and the authorities dismiss it as a killing by animals.

There’s noir, its increasingly brutal and sensationalist Scottish version, the dark and gloomy Scandinavian brand – and then there’s Cecilia Eckbäck! There was reportedly something of a bidding war over the Lapp-descended Canadian-Swede’s debut and, as yet unwritten, follow-up novels. This stunning, fascinating and sometimes downright frightening story makes that easy to understand.

Cecilia Eckbäck takes the genre, shakes it, fillets it and provides the best explanation of its existence you will ever come across – and all in the guise of a historical murder mystery!

It’s set in the early 18th century, and with Sweden at the height of its long wars against Denmark, Poland, Russia, Prussia, Saxony and Hanover, a family of Finns migrate inland after the fisherman father loses his nerve.

Settled in a forbidding mountain wilderness on the edge of the Arctic, Maija and her two daughters soon find themselves alone when her man leaves to escape the threatening solitude.

The girls discover the body of a murdered man, but neighbours and the local authorities dismiss the death as an animal attack. Maija doubts this and is driven to investigate, but as her determination for the truth sets neighbours scurrying to protect long-hidden secrets and fans their distrust of the nomadic Lapps, her teenage daughter finds herself increasingly drawn to the mountain and the mystical side of her heritage.

Like many of her Sami people, Maija is deeply superstitious and spiritual. Her dead grandmother is a constant companion. And daughter Frederika is even more acutely aware of the spirit world around her.

As a bitter winter sets in – the Wolf Winter of the title – which pits humans in the most primitive battle for survival against the elements, ancient superstitions re-surface in an atmosphere where witchcraft is still a capital offence. Animism, shamanism and spirituality all feature – as do the wolves, those symbolic and totemic animals who represent night and the worst fears of humans and who the people of the mountain will not even name, preferring a series of euphemisms.

The story, told from three points of view – Maija, her daughter and the village priest – is engrossing from the beginning. The cold, snow and ice are vividly described, both in its ethereal beauty and its powers of destruction. Eckbäck gets the atmosphere and tone completely right to plunge the reader into a bleakly superstitious world.

Wolf Winter is part historical, part murder mystery, with more than a touch of the supernatural, but with the horror unforced and quite natural in such a dark, atmospheric setting. This beautifully written, dark and chilly read will keep the nervous awake at night.

This brilliantly created atmosphere can sometimes overshadow both characters and story, but overall it’s a great debut. When my stretched nerves have relaxed, I’ll look forward to a follow-up in which I expect Frederika to lead us deep into the heart of real Scandinavian noir.