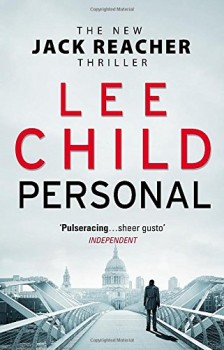 There are believed to be only four snipers in the world capable of making the shot that nearly killed the French president. One of them is American, and favours are called in to set Jack Reacher on his tail.

Strange as it may seem, this is only the second time I’ve made the acquaintance of Lee Child’s famous creation, Jack Reacher. The only other one I’ve read in the 19 book series is The Affair, which took me back to Reacher’s early days in the military police. So what do I know about him? He’s hard as nails (hell, he probably even chews nails, and by that I mean iron or steel, not finger!), women want to go to bed with him, men want to be him – and what do I fixate on? The fact that he doesn’t change his underwear anywhere near often enough.

Reacher likes to travel light, only carrying a toothbrush, and buying new clothes when he needs them, promptly discarding his old ones in the nearest bin. And as far as I can work out, he only did that twice in the entire book. As the action certainly takes place over more than two days, that is nowhere near enough changes of underwear. Now, moving on to weightier matters…

Someone has taken a pot-shot at the French president in Paris. The dastardly deed was foiled by a nearly unbreakable bullet-proof screen, but that isn’t much consolation to those tasked with the security of an upcoming G8 summit about to be held in the UK as it’s not considered good form for world leaders to be seen cowering behind screens at the all important photo calls.

The sniper was working at an almost impossibly long range, and it seems that there are only four people in the world who good enough to have made that particular shot: a Brit, an Israeli, a Russian and an American. The latter, John Kott, has only recently been released from prison, put there by Reacher during his time as an MP.

Strings are pulled and favours are called in. Reacher finds himself tasked with the job of bringing John Kott down a second time. He’s assigned an aide-come-minder, Casey Nice, but as she regularly pops anti-anxiety pills and has never operated in the field before, it’s anyone’s bet whether she’ll be a help or a hindrance.

Despite his somewhat unsanitary personal habits, I found myself more drawn to Reacher than I expected. The character definitely goes beyond the stereotypical macho man beloved of so many thriller writers (and readers). He’s laconic, economical with both words and action, and sparing with technical detail, but when the details do make an appearance, they’re always worth reading, even when covering relatively well-worn ground such as the reliability of the ubiquitous AK47.

The action moves at a reasonable pace from the US to France and then finally to a pursuit through the warring factions of London’s gangland. I liked the supporting characters from the equally tough and laid-back Bennett, with an unpronounceable Welsh first name and a background that screams SAS, to Casey Nice herself. She’s tougher than she looks, cool in a crisis and nowhere near as wishy-washy as her name might imply.

Somewhat to my surprise, my only criticism is that the final action scene seemed a little rushed, but otherwise, it’s now a lot easier to see Reacher’s vast appeal, provided I don’t dwell too long on his personal hygiene. Nineteen books is a lot to catch up on, but I’m very tempted to try.