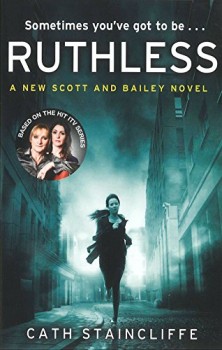 DC Janet Scott and DC Rachel Bailey investigate after a man’s body, shot to death, is found in a blazing and abandoned chapel.

An arson attack on an abandoned chapel on a run-down estate reveals the body of a man, shot to death before the building was set on fire. DC Janet Scott, DC Rachel Bailey and the major incident team move smoothly through their investigation, but just as they are about to wrap it up, two more bodies, killed by the same gun, are found at the site of another arson attack.

DC Rachel Bailey is still, well, Rachel. No matter how hard she tries her life is still messy. Just married, she’s already doubting the wisdom of the move. DC Janet Scott, her older partner, has her problems too. Facing the break-up of her marriage after an affair, she must somehow also support her teenage daughter who has been caught up in the drugs death of her best friend.

Even Godzilla is not immune. Her faithless former husband has become a complete alcoholic – and at the same time is seeking a reunion. How a Detective Chief Superintendent can manage to be smashed out of his mind without anyone higher up noticing – and acting – probably deserves another novel in itself!

Just as it looks as though the investigation is about to be wound up, a second building, not far from the first, is torched – and two more bodies are found, killed by the same gun. Cath Staincliffe is skilled at pacing her story and building up tension and never shies from graphic descriptions of the most horrible crime scenes.

And the book is an object lesson in police procedure. Her research is immaculate. Through this she highlights many of the problems facing the police – including the never-ending battle to keep pace with the manufacturers of so-called ‘legal’ drugs, many as dangerous as banned substances.

But her concentration on presenting the balance between her heroines’ personal and working lives means that men are almost written out of this story – their parts are reduced to being villains, nuisances or colleagues of varying degrees of competence.

These strong female detectives, bound by gender, loyalty, friendship and leadership techniques which smack more of old-school policing than the modern PC force make this, I’m sorry to say, very much a woman’s book. Despite that, there’s great characterisation, strong writing and brilliant pacing.

On a personal note, I’m bored stiff with TV programmes and novels about the social deprivation of any location north of Watford. Real life, with all its problems, actually goes on in other parts of the country as well!