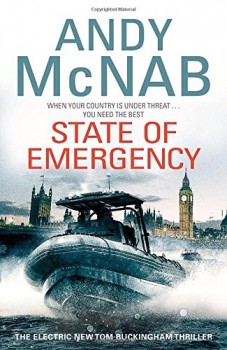 Against the background of growing civil unrest, former SAS sergeant Tom Buckingham has to stay close to right-wing politician Vernon Rolt and decide where his own loyalties lie.

In the aftermath of the UK’s own general election, there was something more than a little chilling in reading Andy McNab’s portrayal of a right-wing government propelled into power by having done a deal with the devil. In this case, the devil in question is Vernon Rolt, a man who advocates taking extreme measures against those he deems to be acting against the interests of the UK

Rolt, boss of Invicta, an organisation which helps rehabilitate ex-servicemen, has in effect built his own private army, and it’s been ex-SAS sergeant Tom Buckingham’s job to infiltrate Invicta and get himself close to Rolt so he can report back to the spymasters in MI5 and their political bosses. But with Home Secretary Sarah Garvey’s fall from grace, Tom is in danger of being cut loose, never more so than when Garvey’s place is taken by Rolt, the very man Tom’s been set to spy on.

In Andy McNab’s usual style, State of Emergency hits the ground running, with an attempted assassination attempt on Rolt, shown through the eyes of the man trying to take him down. The tension ramps up quickly and rarely lets up. Tom’s undercover operation inside Invicta is interweaved with Jamal’s story. The young British Muslim from Croydon went to Syria to impress his father, but quickly became disillusioned with the sickening violence espoused by those whose cause he’d originally supported. When a group of captured schoolgirls are beheaded by jihadists, Jamal risks his life to get the true story of the killings to the West, but finds himself thrown into jail, condemned even without a trial for killings that he didn’t commit.

State of Emergency is frighteningly topical on several levels and doesn’t shy away from difficult issues that are hitting the headlines every day. The ease with which young Britons are being radicalised is set against the problems created by government attempts to curb free speech, further marginalising communities already rife with tension. He presents a convincing picture both of a government pushed into taking radical measures by its own extremists and a society being torn apart by civil unrest.

Tom Buckingham is a strong series lead, especially here when he’s forced into the role of lone wolf, cut adrift by his handlers, and up against strong opposition from former colleagues and shadowy figures manipulating the media and even threatening his own family.

It was good to see more of the gutsy and surprisingly principled Sarah Garvey, a woman who might be down, but very definitely isn’t out of the game. Despite his reputation for writing tough men, McNab has an equally deft touch with his female characters and Garvey is one of his best. The action is as explosive as ever, but it’s the political dimension that sets State of Emergency apart from the run-of-the-mill action thriller. If Sarah Garvey was real, I rather suspect she’d get my vote, and Tom Buckingham is someone you’d want watching your back in a tough situation.