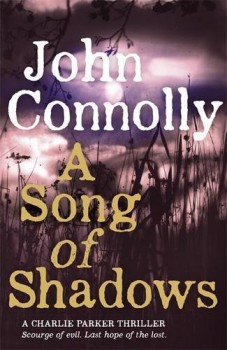 A Song of Shadows

PI Charlie Parker’s recovery from life-threatening injuries in a small US town is hijacked by horrific secrets dating back to the second world war.

Anyone using the ‘transcending the genre’ cliché deserves to be banished to …. Well, insert your own least-favourite end of crime fiction (Christian mysteries and anything including talking cats in my case). But John Connolly’s Charlie Parker series is anything but bog-standard fare.

It’s been an odd series for me, as I felt that the early books promised far more than they actually delivered. But when Connolly, an Irishman setting his books in the US, finally found the groove, the series soared. Like another genre maverick, Phil Rickman, he’s found the balance between crime fiction and horror without ever over-balancing into a sea of woo-woo.

When we last saw PI Charlie Parker in The Wolf in Winter, it’s safe to say he was not in a good way – and I seem to remember wondering where the heck the series could go from there.

Connolly picks Charlie up, dusts him down and plants him in the small Maine town of Boreas to recover from his life-threatening injuries. It’s a long haul back to fitness, though, and it’s hardly going to be uneventful for our man who has a painful past history and a number of very unsavoury sorts who’d happily see him dead.

He soon finds himself involved with a mysterious case where a man has seemingly drowned himself in the sea. And there is his enigmatic neighbour Ruth Winter and her daughter Amanda. Ruth clearly wants to keep her distance, but Amanda is a friendly child with health issues of her own – and a strange girl who appears in her dreams.

Connolly has taken a slice of evil history from the second world war and reworked it with chilling effect – and the story he weaves around it could easily be found, with minimal tweaking, in the newspapers. And he marries this with the claustrophobic setting of the small town where people aren’t what they seem.

I’ve always liked Angel and Louis, Charlie’s laconic sidekicks. They’re looming in the background as guardian angels in A Song of Shadows as Charlie becomes the kind of bloke who the powers that be would prefer not to live in their town. You almost feel sorry for long-suffering chief of police Corey Bloom and her team. Connolly is one of the writers who can bring a seemingly minor character to life in a few canny sentences. And he has an enviable eye for detail – you don’t expect to read a book and find that tiny items like a mezuzah and a bag of stones stick in your mind afterwards.

A Song of Shadows has it all – poetic writing, dark humour, a dash of the supernatural and a thoroughly chilling plot. Connolly is pure class.