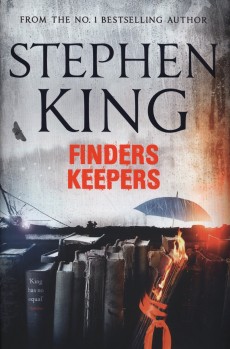 At a time when his family is falling apart, Peter Saubers finds a trunk full of cash and Molskine notebooks. The money is enough to save his family, and what’s in the notebooks changes his heart.

In 1978, Morris Bellamy and two accomplices break into the home of reclusive writer John Rothstein. They steal $20,000 in cash from the safe, but money isn’t what Bellamy came for. Rothstein’s best-selling trilogy and his wildly popular character, Jimmy Gold, have shaped Bellamy’s life, and what Rothstein did to Gold in the third book has driven Bellamy crazy. He isn’t there for the money, he’s there for the notebooks: two new Jimmy Gold novels, written but never published.

Bellamy is worried about being linked to the theft and Rothstein’s murder, and let down by his friend and potential buyer, Andrew Halliday, he stows the cash and the notebooks in a old trunk and buries it under a tree next to a river behind his family home. That same night, he goes out and gets drunk, blacks out and wakes up in jail, accused of assault and rape, neither of which he remembers. Overwhelmed by the evidence, Bellamy pleads guilty and is sentenced to life.

In 2009, 15-year-old Peter Saubers finds an old trunk buried behind his family’s home. Life’s been tough since his dad was mown down by a psycho who drove a Mercedes into a line of people outside a job fair. His legs are damaged, he lost his job and he drinks too much. Peter’s mom is trying to hold the family together but she’s fighting a losing battle. So when he finds $20,000 in the trunk, he decides his family needs the money more than he needs to own up to the discovery.

Four years later, the mysterious monthly payments have helped the Saubers get back on their feet, and the contents of the notebooks have helped Peter on his way to his dream of studying English Literature at college. But now the money has run out, and his parents still can’t afford to send his little sister to the same school as her friends. So Peter decides to sell the notebooks with the help of shady book dealer Andrew Halliday, neither of them realising Morris Bellamy has been paroled from prison, and is returning home to retrieve the notebooks he’s been thinking about for 35 years.

This is Stephen King at his best, weaving an intricate tale of murder and revenge, of family and friendship. The book is a follow-on from his 2014 novel Mr Mercedes, and reunites some of the essential characters from that story, and while it’s not necessary to have read it (I hadn’t) it probably makes more sense to read them in order. There are threads that start in the previous book and that start in this one, and threads that carry over to obviously a next book. But the story here is self-contained and it’s brilliant.

King is capable of conjuring up people you want to get to know and places you want to be. From the moment I started reading Finders Keepers, I lost track of time until it came to its thrilling end. Long-time fans should adore this one, and for new initiates, it’s not a bad time to start a love affair with King’s work.