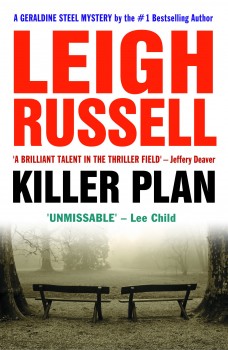 Caroline Robinson’s life is turned upside down when her husband is murdered and one of her sons is kidnapped, but she can’t go to the police for fear of implicating herself.

A chance meeting on a park bench with someone she went to school with many years ago turns Caroline Robinson’s well-ordered but rather dull life upside down. Never in her widest dreams did she suspect that a seemingly harmless plan to pep up her marriage with an attempt to make her husband jealous would lead to something as drastic as his murder.

Matters get infinitely worse when the killer demands Caroline’s help in another death, and kidnaps one of her twin boys to secure her cooperation. Caroline is unable to go to the police for fear of implicating herself in her husband’s murder and has no one to turn to.

The case is given to DI Geraldine Steel. Things aren’t plain sailing for her, either, and when the murder of a colleague leaves her with a secret of her own, Geraldine has to decide whether to come clean about having spent the night with a married man, or say nothing to protect her own career.

I’ve dipped in and out of Leigh Russell’s Geraldine Steel series over the years, but not having read every one is certainly no barrier to taking the plunge now. The books invariably deliver a good, solid police procedural and Killer Plan is no exception, although there were times in the early stages when I had to struggle to maintain my suspension of disbelief at the central premise. But as the story gathered pace and gained depth, the character of Brian, murderer and kidnapper, became more chilling and at the same time more believable.

There are certainly times when the widowed Caroline doesn’t attract much sympathy, but her two young boys do, especially Ed, who doesn’t understand why he’s seemingly been packed off by his mother to spend time after his father’s death with a man he doesn’t even know. The child’s confusion is a painful thread running through the story, and it is by no means certain that things are going to be unravelled in time to prevent Brain claiming another victim. The tension mounts steadily towards the closing stages and Leigh Russell delivers another strong episode in Geraldine Steel’s career.