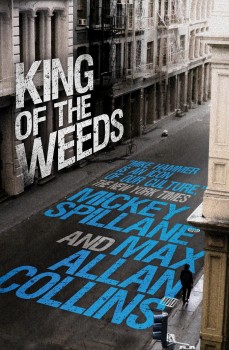 King of the Weeds

PI Mike Hammer and secretary and partner Velda are planning a long overdue wedding when he is targeted by a hitman. At the same time, the couple’s friend Captain Pat Chambers, nearing retirement, finds his whole career under threat when a man he and Hammer helped convict years before is freed – and policemen start to die.

The New York Times called PI Mike Hammer: “An icon for our culture”, but that was in an older, brasher America before defeat in Vietnam, foreign policy debacles and the numbing shock of the terrorist attacks of 9/11.

Hammer, credited with almost single-handedly sparking the post-1945 explosion of paperbacks and who sold tens of millions of books, bids to resurrect that role in the third of the part-finished stories left by his creator Mickey Spillane and completed by Max Allan Collins, his friend, executor, film maker and author.

The legendary PI is the certainty Americans crave. Principled, convinced, ruthless, an unstoppable bulldozer for right and justice who cares nothing for social trends, position, wealth or legal niceties. Set in the late 1990s, Hammer has hardly mellowed with age, just slowed a little, but he’s as tough and resourceful as always.

Neither has his partner: “A beautiful woman, who could make men decades her junior stop and stare.” She is: “Statuesque, raven-haired, with a shoulder-brushing page boy that thumbed its nose at changing fashion, and a body that made a silk beige blouse and brown knee-length skirt seem provocative.” Welcome back Velda – the distaff half of the longest partnership and romance in the history of crime writing.

The couple, now in their 60s – I reckon 70s, but who cares – are finally contemplating marriage. Their old friend police captain Pat Chambers is nearing retirement. The story explodes into action when a hitman tries to kill Hammer. Who wants him dead? The mob? An old enemy? Someone who thinks he knows where an impossible huge stash of Mafia cash is hidden?

Forty years before, Hammer and Chambers combined to jail Rudy Olaf, prison nickname King of the Weeds, for a string of murders. New evidence will free him – and his suit for wrongful imprisonment make him a fortune. Chambers’ career and reputation will be ruined.

As the parallel stories develop, cops begin to die around New York. Hammer knows where the money – buried by an old army buddy – is hidden. Pursued by gangsters – and the Treasury Department – he must somehow link all these apparently unrelated events.

Collins’ ability to reproduce Spillane’s unique style continues to amaze. It’s impossible to tell who wrote what. This story, however improbable, is probably the best of the new series with an explosive climax and a quieter final scene leading to one of those surprise endings which are a Hammer hallmark.

King of the Weeds is timeless and brilliant – everything a private eye thriller should be!