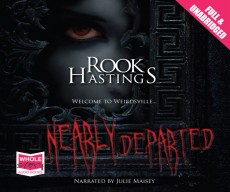 Emily believes her house is haunted. A group of her schoolfriends decide to investigate, but nothing in Woodsville is ever straightforward.

Woodsville, a town somewhere unspecified in the UK, takes its name from the forest that was cut down to make way for grim high-rise tower blocks and sprawling, violent estates. But the trees left behind a shadow that never quite leaves the town, which more than lives up to its nickname of Weirdsville. There’s more than one reason not to venture out at night around there.

Teenagers Kelly, Bethan, Jay and Hashim all know each other from school. Kelly’s pretty, sparky and scary, especially if you’re a boy and you fancy her; Bethan dresses like a Goth; Jay’s clever but gets written off as a geek and Hashim is football-mad. Kelly doesn’t take crap off anyone, and as her brother’s being detained for attempted murder, most people aren’t keen to mess with her, but even she’s afraid of Carter and his gang, as he’s vowed revenge on Kelly for what her brother did.

The four teenagers form an unlikely alliance when they decide to help pale, insignificant Emily, who’s convinced her house is being haunted. Under the pretext of a science project, they blag some equipment off Hashim’s parents, who run a shop, and turn their hand to ghost hunting. At first nothing happens, but then Emily mysteriously ends up being transported into a locked room with no idea how she got there, and on top of that, the recording instruments come up with some unexpected and terrifying results.

As well as having to contend with some very spooky goings-on, Kelly has to cope with being terrorised by Carter and his mates and it’s a toss-up at times whether Weirdsville or its gangs are the scariest.

There were times when Nearly Departed reminded me of a classic episode of Scooby Doo, with the pesky kids being scared by ghostly goings-on, except that here there’s no simple answer behind it all like a sinister caretaker covering up a criminal racket of some sort. The problems in Weirdsville run a lot deeper than that.

The kids are a feisty, likeable bunch, and narrator Julie Maisey does an absolutely superb job of distinguishing between them all. She picks out their individual personalities in a pitch-perfect style that leaves no doubt at all about who is speaking. Her rendition of the various adults in the story is equally confident.

The story gradually gathers pace and the tension is cleverly ramped up. The pieces of a complex puzzle start to slot neatly into place, but the picture that emerges is both unexpected and beautifully put together. The clues are all there but they’re subtle, and I’ll freely admit that even having listened to the next book in the series, the ending of this one still came as a very chilling surprise. But if you can, start here and then go onto Immortal Remains. However, if you’ve already read that, like I had, then this is still unmissable.