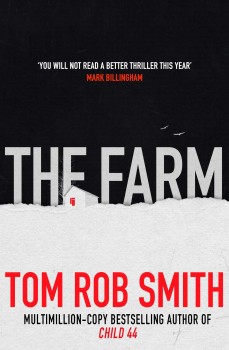 Daniel hears from his father that his mother has become prey to fantasies, has escaped from an asylum and is on her way to see him.

Daniel’s parents have been five months retired from London to a small farm in rural Sweden, the land of his mother’s birth. An only child, Daniel fears that the revelation that he is gay would upset his parents and has therefore had minimal contact, so a phone call from his father announcing that his mother Tilde has become mentally unstable comes as a great shock.

A call from Tilde quickly follows, announcing her passage to UK and asking for his help. On her arrival she relates a chain of events following their arrival in Sweden, which she is convinced prove a pattern of criminal activity, and specifically of the murder of Mia, the adopted daughter of one of her neighbours.

As Daniel listens to his mother’s tale it is clear she did not find friends in the local community, and that local hostility arose from her suspicions about the abuse of young women. Unfortunately, the facts she relates are all susceptible to a different explanation, and the enmity to her unwillingness to submit to the local male-dominated culture. Daniel recognises the signs of paranoia in Tilde, and eventually sees no alternative but to consign her to a mental institution.

Daniel is sufficiently concerned, however, to make a visit to Sweden, to investigate not only the setting of recent events, but also the circumstances nearly 50 years ago which led Tilde to leave Sweden for a life abroad. What Daniel uncovers clears up both mysteries.

The rural setting plays into the fears most urban dwellers have about life in the backwoods, especially in a sparsely-populated part of Scandinavia where the climate can be so gloomy and agricultural drudgery forms a very large slice of life. Fairy stories of trolls and other mythical creatures contribute to the alien picture built up in Tilde’s tales.

The main interest in The Farm, which takes up the greater part of the book, is Tilde’s story, which she insists on relating piece by piece. Her rendition of events is accompanied by interpretation, but the reader is conscious at all times that a less sinister meaning is possible, and indeed more likely. Successive revelations keep the reader uncertain as to exactly where the truth lies.

This paperback edition of the book begins with six pages of reviews, with enough hyperbole to choke the largest troll. The book certainly has enough to keep the reader interested to the end, but the plot device has been done better before, and without giving too much away it has to be said that in some respects the end is an anti-climax. The Farm is not by any means the best Scandi thriller you are likely to read.