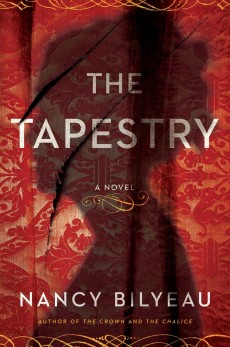 Against her will, former novice nun Joanna Stafford is dragged back into the plotting and brutality of Henry VIII’s seething court – and becomes the target of a killer.

At the same time, she offers a deep psychological insight into a young noblewoman who unwillingly left the cloister and who, in spite of her training for a life of prayer and study, still struggles with her often impulsive behaviour. Since her Dominican priory was closed, Joanna has tried to live a quiet life weaving tapestries. Yet her background – she is a distant cousin of Henry VIII who has executed many of the senior males of her family including her father – and her own moral code, which sees her prepared to risk her life for what she most values, has seen her already involved in two plots against the king.

Henry summons her to court to discuss a tapestry commission. Desperate for an income to allow her to raise her young nephew, Joanna obeys, but within minutes of her arrival, is the subject of a murder attempt. Thrown into a web of intrigue that pits her against new and former enemies, Joanna has only her wits, courage and integrity to her protect herself and her friend Catherine Howard, the ageing, sick and volatile king’s new favourite, from those determined to alter England’s destiny.

There is a wealth of backstory and history between the characters, and although Bilyeau does a superb ‘catch up’ job, you really need to read the first two parts of this remarkable series to fully appreciate the twisted and often shocking events. This story of suspense as well as authentic historical drama has a feel and flavor few can rival. Bilyeau’s attention to detail is flawless and she effortlessly strikes the delicate balance between personal and political.

Her characterisations of historic figures like Henry, Thomas and Catherine Howard, Jane Boleyn, Stephen Gardiner, Thomas Cromwell, Eustace Chapuys and others defy stereotyping – and few, although treated scrupulously on their merits, come out of it with credit – while her description of the art of tapestry adds an unexpected glimpse of cultural elements of 16th century life.

On a personal level Joanna’s confused feelings for the two men in her life, Edmund Sommerville, the former Dominican friar she almost married, and Geoffrey Scovill, the constable who has twice saved her life, are handled with both understanding and intelligence and never detract from the drive of the story.

Anyone familiar with the Tudor court will know some of the wider issues involved – the religious upheavals, the constant shifts in relations between Henry and his courtiers, the fate of his wives and others. But seeing them from Joanna’s unique perspective brings a new life and understanding to the period.

This is a superb and exciting ending to what has been one of the very best short series set in one of the most dramatic periods in English and European history.