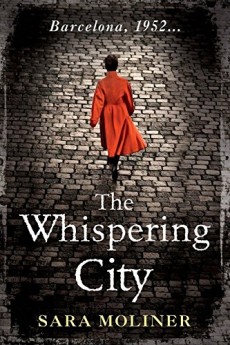 When a prominent socialite is murdered, young journalist Ana Martí Noguer gets her first chance at a big story – and enters a ruthless world of corruption and violence which lies behind the glitz and glamour of Barcelona’s Fascist power brokers.

This intelligent thriller simply oozes the fear, sleaze and corruption which was the hallmark of 1950s Spain. It’s set in an all-too believable post-civil war Barcelona which builds to a brilliant climax. The only real surprise is that Sara Moliner is a nom de plume for the Spanish-German writing duo, Barcelona native Rosa Ribas and her co-author Sabine Hofmann.

It is 1952 and Franco’s regime rules by terror and fear. Many people the government judges tainted and who were once prominent are no longer so. Life continues under a state-imposed cloud of apprehension. Secrets can literally be lethal.

Ana Marti is a young journalist, her writer father out of favour for his political views, her brother executed as a Communist. As a woman in a society where manliness is celebrated, all she is allowed to write is stories on society parties and fashion. But when one of the socialites she reported on is murdered and her paper’s crime writer is off sick, she gets her chance at some real reporting. Or so she thinks. Instead she is attached to the officer investigating the case to present the work of the inefficient, brutal and corrupt service in a light which reflects well on the regime.

Inspector Isidro Castro is heavy handed, under pressure, and, like most men Ana comes into contact with, not thrilled at the interference of a woman. In his Fascist – and very Spanish – world, there are only three roles for women, wife, mistress or whore. When Ana uncovers a clue the police have overlooked, and begins to investigate along with her cousin Beatriz, a linguistics specialist barred from working by her political leanings, Castro is by turns, patronising, furious and finally grudgingly admiring.

The clever and original story slowly expands from simple murder to an intriguing puzzle involving some of Barcelona’s corrupt and ruthless power brokers and a violent and spectacular ending.

Impatient readers may well carp at the story’s apparently leisurely early pace or be confused by the convolutions of Spanish family connections, but stick with it, it all has a part to play and the edgy sense of darkness and fear, a wealth of shady characters and an almost understated writing style give real depth to the story.

If Ana often comes across as a little naive at times, it is all part of a brilliantly written build-up which gradually screws up the tension while superbly conveying a very real feeling of time and place.

Those readers who have come across Carlos Ruiz Zafón or Rebecca Pawel will appreciate this latest addition to the list of Spanish writers. Those seeking a beautifully written, clever – and above all – very different, crime thriller, in a wonderfully portrayed period setting will not be disappointed either.