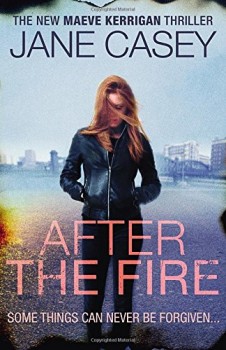 After a devastating fire in a London tower block, DC Maeve Kerrigan and DI Josh Derwent have to uncover the secret world of the 11th floor.

A fire rips through a London tower block on the run-down Maudling Estate. DC Maeve Kerrigan and colleagues are called in to investigate. A high-profile politician responsible for a lot of the tension in the local community is found dead at the scene, but it wasn’t the fire that killed him. Whether he fell, was pushed or jumped isn’t clear, but Kerrigan’s boss, Detective Chief Inspector Una Burt wants answers and she wants them quickly.

There isn’t exactly a shortage of potential reasons for the arson. There’s a family of local villains living a life of luxury in a former council flat; two women, possibly trafficked sex slaves, who died locked in one of the rooms, and then there’s the mystery of what MP Geoff Armstrong was doing there in the first place.

Kerrigan and her difficult, abrasive colleague DI Josh Derwent befriend a small boy found hiding behind a car in all the chaos and are determined to locate his mother, even though their boss is equally determined that they’ll make the case of the dead MP their priority. But there are a lot of secrets hidden on the 11th floor, and they all need unravelling, stretching Kerrigan and Derwent to their limits in the process.

Amidst the pressure of a high-profile investigation, Kerrigan has to deal with her own problems as well. Her boyfriend Rob has left her after playing away and keeping secrets, she’s still being stalked by the obsessive computer expert Chris Swain, she’s got an ulcer and, to make matters worse, Derwent decides to move in with her while he plays white knight to someone else’s problems. Oh, and everyone on the team thinks they’re sleeping together, and that’s enough to give anyone an ulcer!

The relationship between these two equally dysfunctional characters is at the heart of the book, and this is an area that Jane Casey continues to handle with admirable skill, thankfully staying well away from the usual crime fiction trope of bucket-loads of unresolved sexual tension. Derwent is always delightfully awkward and is as politically incorrect as ever, but still has the ability to surprise everyone, including Kerrigan, with his occasionally sensitive handling of someone connected to the investigation. Despite the sparks that regularly fly between them, they’ve each got the other’s back, and that becomes very important indeed as the tension ramps up towards the end.

After the Fire is complex, tense and extremely compelling reading. I’ll freely admit that Derwent is my favourite (I like bad boys, so sue me), but Maeve Kerrigan is very definitely a character who’s going from strength to strength in every book. Her problems and back-story never feel over-played, unlike those of some main characters elsewhere in the genre who can often seem little more than a vehicle in a competition between authors to see who can damage their protagonists the most, and after a while, that does become extremely tedious. In contrast, Kerrigan is just the right mix of fragility and toughness, standing up to the worst of Derwent’s bad behaviour with increasing style.