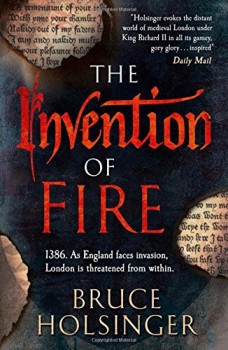 The Invention of Fire

Sixteen corpses have been dumped in a London midden bearing wounds not seen before. John Gower, poet and trader in secrets, investigates despite official reluctance and struggles against failing vision, deception and treachery to prevent an even more devastating massacre.

John Gower, unsuccessful poet, trader in secrets, briber, blackmailer and reluctant investigator is not an easy man to like. But whatever Gower’s faults, this sequel to Bruce Holsinger’s debut A Burnable Book shows once again that a lack of patriotism is not one of them.

For a man who lives metaphorically at least by sifting dirt, this story has a fitting opening. Sixteen bodies are found in a London midden. No-one knows the dead men, the way they were killed or who could be responsible – and the authorities, both City and Crown, seem reluctant to pursue the matter. At the same time, however, they seem desperate to recapture a man and woman who have escaped from jail in Kent, where Gower’s friend Geoffrey Chaucer is a magistrate.

Gower reluctantly agrees to investigate and in a climate of fear and suspicion, with nobles conspiring against King Richard, the common people complaining about increasing taxes and a possible French invasion threatening, finds he is soon caught in a web of intrigue which all points to treason.

Scholar and novelist Holsinger is as equally at home when depicting the machinations of the rich and powerful as he is the fears and hopes of the working class. This excellent mystery is told in the earthy language that Chaucer did so much to shape which adds a layer of authenticity to the late 14th century world he so cleverly brings to life.

London itself plays almost as much a part as do the characters. Real people like Chaucer, London Mayor Nicholas Brembre and various members of the aristocracy mix with fictional ones, to fill half a dozen different plots. Holsinger recreates the sights, sounds, and even the smells and combines them with a complex story of multiple murders, intrigue, pilgrimage, the law of Sanctuary, religious hermits – and an amazingly accurate technical description of the development of a new weapon which was to change the face of war.

Across Europe, the later decades of the century saw unprecedented innovation in the development of small arms, as gunpowder weapons grew more portable and efficient. One of Holsinger’s key characters is a London smith whose skills improve the technology of the new ‘handgonnes’ dramatically, but in doing discovers he must pay a moral and ethical price.

The narrative switches frequently from Gower’s first person voice to the third person and there are many characters with varied and seemingly unconnected stories, but, somehow they all come together to make sense in this complicated book.

It’s not an easy read and is probably best for those who have some knowledge of the period, but if you can persevere, it is a true gem. Holsinger shifts effortlessly from the dark alleys of London and Calais to more than one quite tenderly told love stories. His at times almost poetic prose, deep research and deft way of making his characters come to life  – even as some of them die  – makes this epic drama one of the better books of the year, but also of this genre.