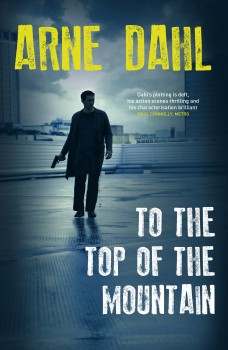 To the Top of the Mountain

It’s summer in Stockholm. The A-Unit has been disbanded, and its former members are disillusioned. Detective Paul Hjelm and his team race against time while investigating three separate cases.

There is no more A-Unit: Special Unit for Violent Crimes of an International Nature. It has been disbanded in disgrace following the Kentucky Killer case, and its disillusioned members are rattling around in Stockholm.  It’s Swedish midsummer. People want to celebrate away from the city. Others seek solace in work …

Kerstin Holm and Paul Hjelm seem to be going through the motions, conducing tedious interviews with witnesses who were present in a pub where a young football supporter was hit by a beer mug and killed. A picture of the crime scene develops: two distinctive groups of people were present. Different languages were spoken.

Viggo Norlander, a late brand-new father of a surprise baby, and ironic stoic Arto Söderstedt, father of five, are trying to get to grips with an explosion in a high-security prison. A man has been blown apart beyond recognition, literally being scraped off the walls. Traces of unusual explosives are found.

Gunnar Nyberg, the biggest cop in Sweden, is rebuilding his private life bit by bit, while working in the paedophile team with the bright Sara Svenhagen. Both are desperate to stop the horrors happening but seem powerless in the cyber world. Then Sara finds something important, a touch of hope, but her superior forces her to work undercover.

Jorge Chavez investigates a massacre in dark suburbs: five people are killed and after meticulous analysis the only certain thing is that two gangs were involved – an East European drug ring and neo-Nazis. The level of violence is shocking. The explosive is the same as the one used in the prison. Oh, and a suitcase is missing.

And there are the customary suspicions about a well-known drugs baron/honest restaurateur Serbian-Swede Rajko Nedic, who loves tending to his fabulous garden. Behind the scenes he’s a tyrant, running an extremely smooth operation.

Former Detective Superintendent Jan-Olov Hultin is resigned to his fate of doing Sisyphus jobs in his garden. Yet he comes alive when he’s given a chance to recreate the unit to investigate whether something extremely dangerous is brewing in Sweden. Bringing six people back is a challenge but they are ready to feel needed again. They take a while to start working as a tight group and bouncing ideas off each other.

To The Top of the Mountain is the third novel in the Intercrime series and was first published in 2000 in Sweden. It’s a slow-burner, gradually pulling all themes together to create a web of connections and motives. Those are not obvious but then A-Unit isn’t an average bunch of policemen.

Arne Dahl masterfully manages the narrative and tempo: dramatic and brutal attacks are interspersed by simple philosophical thoughts. You cannot rush when reading To The Top of The Mountain, and you cannot leave it alone. Your conscience will not let you.