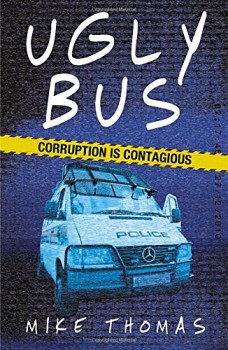 Newly-promoted young sergeant Martin Finch struggles to control a group of veteran policemen under the pressures of a football riot and violent demonstrations.

No wonder the author lives in the wilds of Portugal! The former South Wales copper is hardly going to be popular with his former colleagues after this excoriating expose of everything that’s wrong with today’s police.

The Ugly Bus of the title is a Territorial Support Group van. Its crew of four – there should be five, the other is suspended – are the central characters in a brutal, foul-mouthed, warts and all story, a compelling blend of darkness and humour which reflects the problems and pressures of modern front-line policing.

Martin Finch, an idealistic young sergeant, the product of a ridiculous system which takes university graduates and offers them accelerated promotion beyond their experience, is put in charge of the unit. He is desperate to emulate his late father, a legendary sergeant who he idolises. His team are a strange mixture of characters, so realistically portrayed you get the feeling Thomas has borrowed heavily from memory, are typical veteran TSG officers. The Group, known in all forces as Millwall FC – fans’ motto: ‘Nobody likes us and we don’t care’ - are the shock troops of the police, dealing with public disorder.

There is Andrew, nickname Thrush, a thick ex-Marine in a largely loveless marriage, an apparent abuser, who thinks proactive policing is hit first and hardest; David (Flub – fat lazy useless bastard), a family man with several ex-families to support and a heavy drinker; Alan (Dullas – my editor won’t let me explain that one!) a religious nut; and Vince, an egotistical sexual predator who has survived only because he is able to blackmail senior officers.

The story is largely concerned with the group dynamics of this ensemble, with their effect on each other and how being a member of a group can affect people’s actions. The repeated mantra: ‘What happens on the van stays on the van’ is a reflection of their hermetic and often dangerous world.

The action centres on a Boxing Day football match between Cardiff and Swansea – traditional enemies to rival Celtic and Rangers in the fierceness of their battles on and off the pitch – and rival political activists who plan violent demonstrations of their own.

The story is shot through with often crude, but never out of character, humour. There is a brilliant moment when Thomas highlights the huge disconnect between politically correct senior officers and the boots on the ground. At a briefing session, the serial play ‘bullshit bingo’, selecting lists of management-speak and PC clichés in a bid to win a whip-round jackpot.

As the shift develops in a blaze of violence, Martin finds his control of the team is purely nominal and that he does not even have the experience to fulfil his own role. All five officers have their own problems to think about – Martin’s wife is imminently expecting their first child – as well as the drunken fans and determined troublemakers and this adds to the pressures. Meanwhile, chance and an excess of drink, propel a young woman onto a collision course with them.

And when you think the plot has no more twists and turns to offer, the final scene is startlingly revelatory. The acronyms and police terminology used throughout add to the overall impact of this brilliantly observed, sharply written and all too realistic plunge into the depths of the often sordid world of law enforcement.

As a former crime reporter with many friends in the Job, quite simply, this is the best description of real life policing I’ve read. Thomas pulls no punches. The problems, the shortcomings, the opportunities for cover-up and corruption are all there, presented in a near-documentary manner and should be compulsory reading for all new Home Secretaries and Police Commissioners