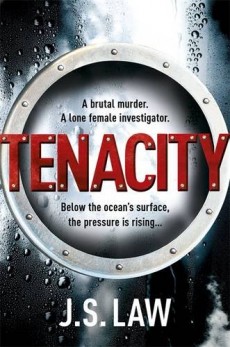 Lieutenant Danielle Lewis, a Royal Navy special branch investigator, finds herself in the insular world of a nuclear submarine as she investigates the suicide of one of its crew.

The start of former submariner JS Law’s debut novel is faintly disconcerting – it reads like the ending to a book. I was convinced for a moment that I’d got a faulty proof copy. But then all became clear – and what happens pervades the rest of the story.

Lieutenant Danielle (Dan) Lewis is a Royal Navy special branch investigator. She’s famous – or possibly infamous – in and out of the navy for her previous case, and has had time out. But she’s back in the thick of it when a sailor kills himself on a nuclear submarine just days after his wife is murdered. And Dan insists on being the one to go aboard HMS Tenacity to investigate.

Dan is of course our usual ballsy lead character who won’t take help from anyone, not even close colleague John Granger, and has enough baggage to bring Heathrow to a grinding halt. This occasionally feels overdone, but Law makes the reader care about her. I wasn’t entirely convinced by the extent to which Dan plays the solitary maverick, but of course it makes good drama.

The book is at its most powerful when Dan encounters the constant misogyny onboard the submarine. Given that women have finally been allowed to serve on them, it’s hardly the face the Royal Navy wants to show the world. But some things deserve to be heard loud and clear – and institutional sexism is high on that list.

Tenacity is an outstanding example of writing what you know. Only someone who has served on a submarine can capture the intense and claustrophobic atmosphere. There are only one or two occasions where there’s an ostentatious information dump of someone being told something they almost certainly knew already. The sounds and smells leap off the page, and I can still picture the scene where Dan struggles to get to grips with the life-saving breathing apparatus.

It’s not the sort of book I could read in one gulp – it’s too dark and intense for that. And it does tend towards the One Damn Thing After Another school of plot pacing; just occasionally I wanted to catch my breath, and I’m sure Dan did as well! But Law resists the temptation to tie things up too neatly at the end – and that bodes well for the next book in what should be a compelling series.