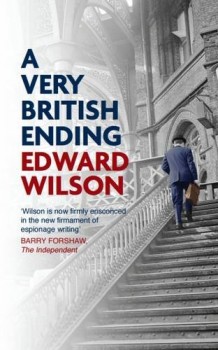 Senior MI6 officers Catesby and Bone try to outwit a cabal of power-hungry plotters on both sides of the Atlantic trying to overthrow the British Prime Minister.

Like the legendary George Smiley, Edward Wilson’s SIS man William Catesby relies more on intelligence than violence – although he is perfectly prepared to kill in cold blood. Although his loyalty is never in question, his struggles with his own conscience and political convictions lead him almost to the point of a breakdown.

Using his cosmopolitan background as a scholar and soldier, Wilson creates authentic settings and plots based on verifiable events.  A master of ambiguity, he produces likable villains and nasty heroes as he exposes what he sees as the dark underside and power games of the Secret State on both sides of the Atlantic.

The story covers more than 40 years from the atrocity of Oradour-sur-Glane in June 1944 when units of the Das Reich SS division massacred more than 600 men, women and children in a French village.

Catesby – it is an office joke that his alleged ancestor Robert planned the Gunpowder Plot of 1605 – working with the Limousan maquis at the time of the massacre, is deeply affected and later executes a former Nazi officer who was involved. The German turns out to be a CIA ‘asset’, who is being ‘rat-lined’ to South America. In the bitter winter of 1947, when even the Channel froze and Britain faced starvation, a young cabinet minister negotiated final details of a pre-arranged deal with Moscow, trading Rolls-Royce jet engines for cattle fodder and wood. The Russians used them to power the Mig 15, so deadly to American planes in the Korean war.

Both men have made powerful enemies with long memories and their fates become entwined as one rises to the senior ranks of the Secret Intelligence Service and the other to Downing Street.

By the mid-1970s, Harold Wilson has become Prime Minister and the power and money brokers on both sides of the Atlantic, led by the obsessive CIA deputy director James Jesus Angleton, believe him a Soviet plant and plan his removal.

Faced with civil unrest at home, the failures of Wilson’s policies both overseas and in Ulster and a desperate economic and financial situation, unbelievably by 1968, a British coup d état, led by right-wing members of the establishment, MI5 and the armed forces, was imminent. Even a senior member of the Royal family was approached as potential head of a government of national unity!

If you lived through those days, as I did, you’ll know some of this is fact. Even the un-named plotters are easily identifiable from the Soviet defector Anatoliy Golitsyn, who claimed Hugh Gaitskell had been assassinated by the KGB to have the pro-US Labour leader replaced by Wilson, to Cecil King, the head of the International Publishing Corporation and Lord Louis Mountbatten.

Wilson’s skill is to blend fact and fiction so seamlessly that it becomes almost inseparable and completely believable. His failure is that his political motivation has led him to swallow wholesale every conspiracy theory of the loony left and regurgitate it – even to the point added almost as an afterthought – that Margaret Thatcher ordered the sinking of the Argentinean cruiser Belgrano knowing that a peace deal in the Falklands had come into effect!

Despite its bias, this is probably the best espionage story you’ll read this year or any other. It’s brilliantly written, cleverly paced and there’s enough truth to make you wonder just how close Britain might have come to becoming America’s ‘unsinkable aircraft carrier.’