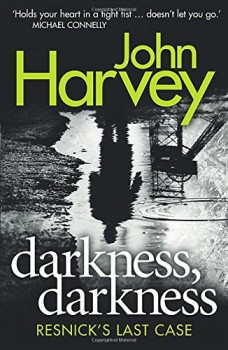 Charlie Resnick, in semi-retirement, is called back to help with the investigation into the killing of a young woman during the miners’ strike of 30 years before.

RIP – and in happy memory – Charlie Resnick, 1988-2014, British crime fiction’s best, most human and, by the length of the braid on a chief constable’s cap, most realistic detective.

Resnick, like all old coppers, after 12 novels, 16 short stories, television and radio plays, audio and e-books, has faded into retirement sitting on a bench in his beloved Nottingham with a cup of takeaway coffee and, naturally, pondering the music of his hero, the legendary jazz pianist Thelonius Monk.

His final case, in which he is more witness than lead officer, is a 30-year-old murder mystery, set against the background of the 1984-85 miners’ strike when Arthur Scargill tried to bring down the elected government.

Harvey has saved his best for last. His research is, as always, immaculate, and will open more than a few eyes clouded by heroic fables. Nothing is spared from what as well as being a brilliant procedural story is also a magnificent slice of social history.

Depending on your politics, some of it may make uncomfortable reading, such as the ‘fraternal contributions’ to the strikers levied on miners in the Ukraine and Russia, or bundles of cash from the communist-dominated French CGT union, smuggled into Britain in suitcases – and never accounted for.

The grudges and resentments left by the strike, particularly in the Nottinghamshire coalfields where less than half the workers responded to Scargill’s call, the brutality and lawlessness of the flying pickets – and the dubious tactics of the thousands of police drafted in to deal with them – are flatly and at times, almost brutally, chronicled.

Resnick, at the time a newly-promoted inspector, ambivalent, at best, about some of what went on, ran a special intelligence gathering unit. Now, in semi-retirement, still grieving over the death of his partner and unhappy with the career climbers who dominate the modern force and who are concerned with burying the past to cover their own backs, is brought back full circle by the discovery of the body of a young woman who disappeared during the strike.

No writer since DH Lawrence has captured the place, the atmosphere and the people of Nottinghamshire so well. Few have approached, let alone equalled, Harvey’s understanding of the seediness of crime and his presentation is strengthened by superb characterisation and a complete lack of glamour.

As a crime reporter I met several senior detectives like Resnick – usually in the constabulary forces – fallible, but doing the best they could to serve the public and earn their rank with experience allied to intelligence and humanity, who represented the best of British policing.

Harvey’s ability to capture and present such men demonstrates his superb reportage combined with a trademark sparse, but measured, lyricism and poignancy.

Above all Charlie Resnick was real. Every reader who shared one of his adventures will regard him as an old friend – a bloke you could share a pint with, talk about football, even if Notts County was a poor substitute for the proper thing – straight as a die, warm, sympathetic, thoroughly human. It is only right he should fade from the scene with style and grace.