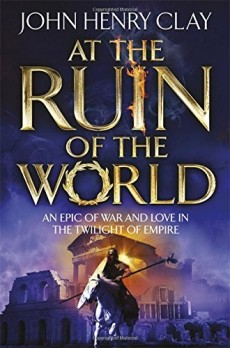 At the Ruin of the World

The western Roman empire is collapsing with its rulers relying on unstable alliances with barbarians while fighting among themselves. Three young people hang on the dream that Rome can be great once more, but how can they save it, or themselves?

The action takes place between 448 and 457 AD as Rome’s emperors struggle to retain what is left of their western empire and chronicles the eventual disintegration of what for centuries had been an essentially unstable military dictatorship.

As the story opens, the Saxons have seized Britain. Much of the rest is under the control of various competing tribes, Goths, Alans, Franks, Sueves, unreliable in their friendship and their alliances uncertain. Then from the east comes the threat of the mounted hordes of Attila, the Hunnish ruler who seeks emperor Valentinian’s sister to wife – and half the empire as her dowry!

To stop him, the Romans must gain the support of the Goths, but locked in memories of their own past glories and importance, the aristocratic families fight among themselves. At this key period, education, politics, military training and philosophy, but above all status, were still major elements of life for those who continued to define themselves as Romans.

To bring all this to life, Clay uses three young people – Ecdicius, a young patrician, desperate to prove himself as a soldier worthy of his father’s respect; Attica his sister, betrothed to her ambitious, but flawed cousin Felix; and Arvandus, a young man whose inheritance was stolen but who is determined to make a name for himself.

Their lives touch and move apart as they witness the events and personalities of this dramatic period, their individual stories impinging in part on the grander political and military dramas. Much of the story focuses on one aristocratic family, the Philagrii, who had a huge impact, and whose eventual failure led to the shaping of medieval Europe.

The scope of Clay’s story is a huge as the theatre of war, with his wonderfully detailed and fascinating descriptions of Gallo-Roman centres, such as Arles and Clermont contrasting with the Goth strongholds of Toulouse and Bordeaux.

Amid constant battles and skirmishes, he contrasts the pompous, self-obsessed Romans with the flamboyant Goths, but as the decline of Rome accelerates, also manages to produce a story of hope. Amid the chaos and killing, the three principals come to think of themselves in a different way, their tragedies and achievements making them determined to preserve the best of tradition while adapting to new realities.

The foremost quality of the story is that Clay makes his huge cast, both real and fictional, come to life. Epic is a grossly overused word, but this book really is. Its sheer scope and sweep of personalities and events will keep you focused to the end.