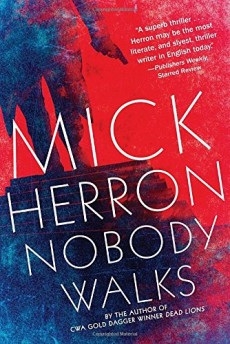 His son’s apparent suicide brings Tom Bettany back to the UK, determined to find some answers.

Tom Bettany is employed at a meat-processing factory in France when he receives a voicemail from an Englishwoman he doesn’t know. She tells him that his estranged son, Liam, has fallen to his death from the balcony of his house. Bettany immediately decides to leave for the UK and to discover the reason for his son’s apparent suicide.

It is not immediately obvious why Bettany – clearly an intelligent man – should have taken up such a menial job in France. Nor is the reason for his estrangement from his son made clear. It seems that he and his wife had been obliged to spend long periods of time apart before she died and that his son regarded this as at least a contributory factor to his mother’s death. Nevertheless, the tragic news of his son is enough to arouse Bettany from his lethargy and he leaves France for London, determined to find some answers.

The previous two novels by Mick Herron, Slow Horses and Dead Lions, both concerned attempts by disgraced MI5 Officers to re-establish their careers. Herron clearly wished to establish his characters as individuals and goes out of his way to give their backgrounds and to show what it was about them that had brought them to the indignity of working in Slough House. Part of his technique in those two novels involves the use of humour and it is instantly clear that he is an exceptional writer of prose who can say a great deal in one well-constructed sentence.

If we examine these two aspects of his work in this novel we are very disappointed. From the point of view of well-developed characters there is scarcely one that holds our interest. We are never convinced that Bettany himself, whilst turning London upside down to discover the truth about his son's death, suffers the kind of grief that a father would. We are not surprised when we discover what he did in a previous life and we have the impression that he has simply taken up where he left off. There is the relationship with his son's girlfriend - just about the only sympathetic character in the book - but little else to convince us that this man is suffering great personal loss.

The remaining characters are fairly trivial - gang members who behave as gang members would, and a high-ranking officer in MI5 who behaves not in the least as a high-ranking MI5 officer would. Even more puzzling is the boss of the IT gaming company who believes that his business would be best served if it were to fail.

We have early example of the wit of which Herron is capable when we are told that Bettany’s job was to carry meat to the lorries – something that ‘not only required no thought, it demanded thought’s absence.’ Later we are told that he had given up all attempts to reach a reconciliation with his son, who seemed determined to blame him. ‘Life, to the inexperienced,’ thought Bettany, ‘happened in straight lines.’ Such examples of le mot juste, however, are rare and the writing never reaches the level of the two previous novels.

If the writing is undistinguished, the actual plot is even more so. Frequently it is at least over-complicated, if not completely obscure, and depends very largely on one extremely clever person being able to anticipate the moves of another equally clever person, thus giving an entirely new meaning to the expression ‘intelligence services.’ This degree of far-sightedness and second-guessing becomes tiresome long before the end of the book. Normally, the fate of the main character in a crime novel is all-important, whereas here the author himself seems so uninterested that it is left unresolved.

It is clear that Herron can write very convincingly and can produce a novel that will keep the reader absorbed throughout. Unfortunately, this isn’t it.