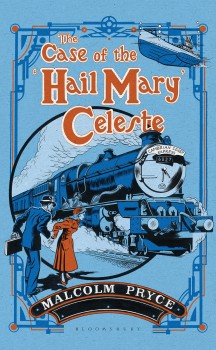 The Case of the Hail Mary Celeste

Railway detective Jack Wenlock sets out to solve the 30-year-old mystery of a party of missing nuns and finds love – and problems with the secret state.

Malcolm Pryce is a modern, but positively dissident bard. Who else could possibly have created the whole improbable sub-genre of Aberystwyth Noir? The Case of the Hail Mary Celeste is a magnificently detailed, eccentric, complex and fascinating mix of history, absurdity, gumshoe novel, oddly touching love story and political condemnation that almost defies description.

It is funny, sad, poignant, nostalgic and romantic. Pryce invokes a dream-like England from influences spanning the popular culture and a haze of nostalgia. It’s full of the imagery, language and attitudes of the Boys’ Own Paper, Pathe News and popular radio serials.

Jack Wenlock is a Railway Gosling, the product of one of the wild eugenics experiments so in vogue before and after the First World War. He is all that remains of a group of orphans imprinted at birth with the image of a railway engine and brought up to regard the Great Western Railway as their only family.

By the end of 1947 that family was to be destroyed by nationalisation and the dozen Goslings, born in a converted engine shed at the Weeping Cross Railway Servants’ Orphanage and trained from birth as single-minded, elite detectives, had all fallen by the wayside  – some dead, some disappeared, some mad, some disgraced. All had attempted what, to them, was the Grail Quest – to discover what happened to the 23 nuns of the Order of the Sisters of Lacrismi Christi who disappeared from a special excursion train from Swindon to Bristol Temple Meads in 1915.

Jack is counting the days until his world disappears – until a young woman with a Veronica Lake hairstyle and an all-embracing knowledge of popular slang, walks into his office. From there on it’s pure Fifties gumshoe. Jack, courtly, old-fashioned, naïve, but able to take care of himself: ‘Punch the blighters on the nose’, regards the world through a Boys’ Own filter of fair play, Englishness and manliness, while always venerating his beloved railway.

But he soon discovers through helping the delightful Jenny that this world is a myth and that the Goslings have been exploited by life’s first-class passengers who treat those in second and third with the contempt and indifference with which rulers have always viewed the ruled.

The mystery of the missing nuns is a constant, outlined by the astonishing and, until now, missing memoirs of Cadbury Holt, perhaps the greatest of the Goslings, which precede each chapter – together with some hilarious reader advice!

Pryce writes beautifully, with style, warmth and humanity, delighting in the language of an era of propaganda and often-exaggerated memories. But he also has deeper points to make. The Goslings appear benign forerunners of the twisted nationalist and racist thinking later harnessed to produce the SS and Hitler, and the self-serving machinations of the ‘great and the good’ will strike an all-too familiar chord with modern readers. His most excoriating attack is reserved for Dr Richard Beeching, the man whose 1963 report closed more than 2,000 stations and hundreds of branch lines, who makes a cameo appearance as a dour, humourless car lover.

Although this book will largely appeal to men, particularly the over-70s, trainspotters who remember the 1939-45 war and were brought up to believe in the Empire and still view others in black and white terms as ‘good chaps’ or ‘rotters’ – and most of all recall the thrill of emerging from the Dawlish tunnels in the cloud of sparks and steam which signalled the real start of a West Country holiday – it is an absolute must.