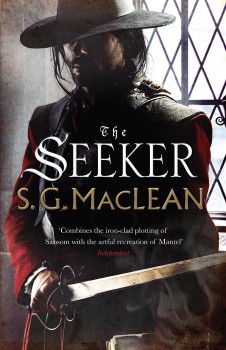 Damien Seeker is a mystery. His family and past are unknown, but as an enforcement agent for Oliver Cromwell he is known and feared as a ruthless investigator, sworn to protect the ruler of England at any cost.

It takes courage for an author to kill off the hero of a successful series. The words goose and golden egg spring to mind. But to have him almost casually despatched by his opposite number – and the main character of a new series – is courage above and beyond!

SG MacLean’s period is the English civil war and its aftermath. Alexander Seaton brought her into the public eye. The fiery Scot was soldier, spy, assassin, plotter in the cause of the deposed Stuart kings. But given his nature – and the efficiency of the intelligence service built up to protect Oliver Cromwell and the Commonwealth – it was only a matter of time before he took one risk too many.

The man who ends his four-book rampage is Damien Seeker, agent in charge of a hand-picked unit of the best and brightest of the New Model Army, reporting directly to John Thurloe, Cromwell’s Secretary to the Council of State and spymaster. Seeker has no past. No one knows even if Seeker is his real name or where he comes from, other than the North Country.

But what is known is that he is utterly loyal to Cromwell, that nothing can be long hidden from him and he is totally ruthless in pursuit of enemies of the Commonwealth.

The year is 1654. Cromwell has declared himself Lord Protector, yet opposition, some of it from former supporters unhappy at his style of government, is growing. European states are waiting for a chink in the English armour and the exiled Stuarts, travelling from Continental court to court, are constantly plotting a return, aided by a royalist underground in England, Wales and Scotland.

In a London teeming with get-rich-quick merchants, spies and soldiers, exiles and assassins, the newly fashionable coffee houses are places where men meet to gossip – and some to plot.The murder of John Winter, a war hero and one of Cromwell’s favourites, shakes the city. A lawyer and dissenting pamphleteer is found standing over the body, clutching a bloody knife. Despite the evidence, Seeker is not convinced. He sets out to uncover the killer and his investigation leads him to royalist plots for invasion and Cromwell’s assassination.

As with the Seaton stories, MacLean captures the febrile atmosphere of the times. Her characters, even the almost one-dimensional Seeker, are completely believable and beautifully drawn. The action is fast and furious with some clever twists to the plot and a surprising ending.

This is a first class, compelling debut for MacLean’s new hero. In fact it’s so good, I’m almost prepared to forgive her for killing off Zander and look forward to learning more about Cromwell’s very own Robocop!