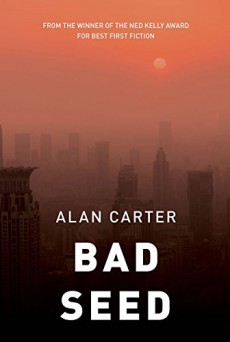 Australian cop Cato Kwong returns to investigate the slaughter of four people, a crime with Chinese connections that brings the detective into closer contact with his heritage.

In this, his third outing, acting Detective Sergeant Philip ‘Cato’ Kwong is working out of Fremantle and called to the brutal slaughter of businessman Francis Tan, his wife and two of their three children. Prime suspects are the daughter’s boyfriend, Tan’s son Matt, who Cato knows from personal experience has a history of violence, and one of several Australian and Chinese business contacts.

One of the latter, Thomas Li, is briefly questioned in Australia before returning to Shanghai. Kwong follows, and is briefed on Li’s background by Sharon Wang from the Aussie embassy, and Driscoll, an intelligence agent. This contact with China leads Kwong to take more of an interest in his heritage than we have seen hitherto, reinforced at home by a renewal of contact with his father, whose health is failing.

A second crime story runs parallel to the first: accusations against Cato’s boss Hutchens of failing, some years ago, to investigate reports of child abuse against Sinclair, warden at a care home. A key witness at a criminal hearing is Mundine, a man with a long criminal history who we learn early on has an agenda. Hutchens’ distraction effectively gives Cato the lead role in dealing with the primary issue.

As in the two previous Cato novels, the plot is dense with characters, often with a history of past contact, frequently abrasive. There is a constant battle with DI Pavlou and her colleagues of the Major Crime Unit, brought in to assist. The author points up conflict in the wider field also: in particular the prejudice towards immigrants, which blighted the life of Cato’s father and currently seems to be hardening, from his comments about the selfish attitudes reflected in the ongoing election campaign. Altogether there is a lot happening, and much of it is pretty bleak stuff.

These dark aspects are somewhat countered by the effect of the slang, often puzzling to a non-Australian. Freo, arvo, rellies, saddo, and servo are not too difficult, but what is an Englishman meant to make of ‘a king-size Anzac dotted with smarties’ or the ‘carrot cruncher in the Driza vest and beanie who looked like he’d taken the wrong turn at Wagin’? While it is interesting to find out, for instance, that ‘cactus’ means ‘useless’, be warned that stopping to look such things up could seriously impede the flow of the narrative for enquiring minds who need to know!

Cato Kwong will appeal to those who like police procedurals with the emphasis on the gritty, where the range of human behaviour put forward for examination is somewhere between disappointing and appalling, and where the locals have a means of expression that is definitely all its own.