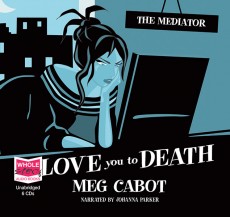 Love You To Death

Being able to talk to the dead isn’t always easy, as 16-year-old Susannah Simon will testify.

Fifteen years ago, I read a young adult book called Shadowland by Jenny Carroll, and was promptly hooked by the exploits of 16-year-old Susannah Simon. Suze, as she prefers to be known, doesn’t just talk to the dead – occasionally she has to punch them in the mouth as well. It later transpired that Carroll was a pseudonym of Meg Cabot, better known for the Princess Diaries. This series was later reissued under her own name.

I devoured each new book in the Mediator series, as it’s known, as soon as I was able to get my hands on them, and when I discovered that several were available on audio, I pounced on them as well. There are now six in the series, the last one appeared in 2006, but it now appears that a seventh is due, maybe next year, this time aimed at an adult audience. So now seems like a good time to indulge myself and wallow in the books all over again, in the run-up to what is – for me, and doubtless many others – a long-awaited arrival.

Love You To Death, the US title, starts with Suze moving from New York to Carmel, California, to join her mother and her new step-father, Andy Ackerman and his three sons, when a sudden vacancy at one of the local schools comes up. Suze has never known her mother so happy, not since the death of her father ten years ago, but three new brothers that she nicknames Sleepy, Dopey and Doc take some getting used to. Suze is hoping for a fresh start, one where she doesn’t have to deal on a daily basis with stroppy spirits who want her help in moving on to whatever sort of afterlife awaits them.

Unfortunately, on her first day at the Junipero Serra Mission Academy, one of the first people she encounters is Heather Chambers. But the problem with Heather is that she’s the reason Suze was able to get into the school at short notice. She’s dead, and not at all pleased that Suze has taken her place. Heather committed suicide after being unceremoniously dumped by her boyfriend, Bryce Martinson, and she’s got absolutely no intention of playing nicely with either Suze or Bryce.

Heather isn’t the only ghost causing complications in Suze’s life. She also has to contend with sharing her bedroom with one of the previous occupants of the house, Jesse de Silva, who just happens to be the hottest ghost Suze has ever encountered.

Johanna Parker delivers an excellently age-appropriate narration every bit as sparky as Suze Simon’s ghost-punching, no-nonsense character. Parker moves the story along briskly, sounding equally at home with fellow mediator and college principal, Father Dominic, as well as the huskily attractive Jesse. Love You To Death is a great series opener and even found favour with my other half, who now seems happy to listen to a staple diet of YA fiction on our frequent journeys to and from France.