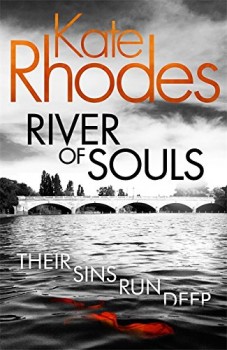 A minister’s wife calls in forensic psychologist Alice Quentin to reopen the case of the attack which left her daughter mutilated and half drowned. A priest and a policewoman die the same way and Alice must get inside the mind of a madman obsessed by the River Thames.

Cabinet minister’s daughter Jude Shelley was attacked, mutilated and left to drown in the Thames. Somehow, she survived and a year later, her mother asks psychologist Alice Quentin to re-examine the case. It’s a dark enough beginning to another grim case for Quentin.

But the pace soon steps up when an elderly priest is attacked in Battersea and his body surfaces at Westminster Pier with an ancient glass bead tied to his wrist. More killings follow a similar pattern: mutilation, drowning and some ancient object, recovered from the Thames mud, attached to the bodies. All the victims are in some way connected to the dysfunctional Shelley family and Quentin becomes certain they are hiding something.

Unless Quentin can break their silence, a mad killer who appears to believe the river, a sacrificial site since prehistoric times, is demanding a new tribute, will continue his attacks – putting even the police investigating the murders in danger.

Kate Rhodes’ strengths, as in her earlier Quentin books, are character, pace and sense of place. Alice Quentin is a perfectly believable 30-something modern woman. Apart from her job, she has a completely normal life. She worries about her ageing mother, her bi-polar brother, her unsatisfactory sex life and her feelings for a married Met DCI with whom she has worked before.

If Quentin with her complex personal life is realistic, so too are the lesser characters. Each is vividly painted, so that even those in minor roles become intriguing. Her best friend, the outrageous Lola, and her on-off potential lover Don Burns, make welcome returns from the earlier case of The Winter Foundlings to play major roles. But it is Rhodes’ shrewd and careful observation of harassed civil servants, obsessive archaeologists and others which ground the story so firmly in reality.

The pace of this dark psychological thriller never slackens from the start, with the insights into the mind of the killer providing a menacing acceleration throughout and plenty of macabre twists and turns. The London settings are superb. It’s almost possible to smell that peculiar odour which only the Thames has where it flows through the city, and Rhodes’ descriptions of some of the geography and major London buildings are as good as a guidebook.

If I had to criticise, the motive behind the murders is weak. But who am I to pronounce judgement on the twisted mind of a mad killer obsessed with the often grim history of London’s river?