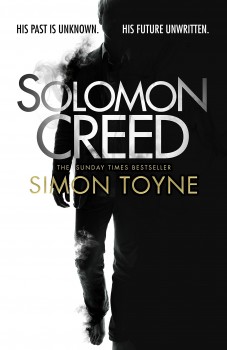 A plane crashes in the Arizona desert and a lone figure emerges from the blazing wreck. He has no memory of his past, no idea of his future. He only knows he must save a man – a man who is already dead.

Solomon Creed has echoes of Clint Eastwood’s superb 1985 film Pale Rider, where the Preacher, a mystery gunman, appears from nowhere to save a California community from a ruthless mine owner. The film took its title from the Book Of Revelations’ description of the Four Horsemen of the Apocalypse in which Death rides a pale horse. There were strong religious references throughout as well as deliberate doubt over what the Preacher actually was – ghost, avenging angel, you took your pick.

Solomon Creed follows much the same pattern as the biggest grossing western of the 1980s – and is none the worse for it. In fact such is Simon Toyne’s ability to maintain a high pressure plot and his sheer writing and descriptive skills, in many ways it’s better to read than watch.

A plane crashes outside the town of Redemption in the Arizona desert and sets fire to the dry scrub. As the blaze spreads, threatening everything in its path, a lone figure emerges barefoot from the flames.

The man is an albino. His skin and hair are strangely white. He has no ID, no money. He has no memory of his past, no idea of his future. He only knows he must save a man – a man who is already dead. The only clues he has are a strangely shaped cross, a mark on his arm and a book of the town’s history, dedicated to Solomon Creed by the dead man.

Who, or what, is Solomon Creed?

Why does the man instinctively know how to save the town from the blaze, have the medical knowledge of a surgeon, the skills and discipline of a martial artist, the ability to ride like a Native American, an instant recognition of firearms or explosives, and a whole range of other arcane learning?

Redemption is not what it seems. Founded by a wandering preacher, its wealth, which provided a stone church the envy of many cities, came from the gold and copper its founder the Reverend Jack ‘King’ Cassidy discovered, has now run out and it hosts only a giant parking lot for obsolete aircraft and a struggling tourist trade.

Cassidy’s descendants, still mayors of Redemption, have sold its soul to the devil in the shape of a Mexican drugs baron, to ensure its survival. Believing his only son to have died in the plane wreck, the primitive and brutal cartel boss seeks revenge on the place where he died. Standing in his way are Creed and the young widow of the dead man – and King Cassidy’s own story which offers Creed a series of clues leading to a shattering conclusion.

The action is non-stop, the characters all too believable, mostly motivated by greed or fear. There’s a strong parallel between Cassidy’s story and Creed’s struggle to get at the truth – and a more than passing similarity between the story and St Paul’s teaching on Divine Retribution in his Letter to the Romans.

And Creed? The final twist is that modern science comes up with his identity – and immediately dismisses it as impossible! But by then he has another mark on his arm and an indication of where his quest will lead him next.

This is an incredibly executed, brilliantly written and absolutely compelling read.