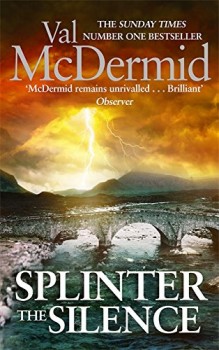 Carol Jordon, faced with the humiliation of a drink-driving charge, turns to former friend and colleague, Tony Hill, and the pair are soon immersed in a series of apparent suicides due to internet bulling. As ever, it takes Hill to spot the patterns others have missed.

Former DCI Carol Jordan is still kicking her heels in the wilderness, doing her best to put the past, and the brutal killing of her brother and his partner, behind her. She’s thrown herself into doing hard manual labour, gutting and re-renovating the barn conversion that was both their home and the scene of their murder.

One thing Jordan has refused to face up to is her drink problem, and this comes to a head in spectacular fashion when she’s stopped and breathalysed on her way home from a neighbour’s dinner party. It’s no surprise to find she’s well over the limit, and she has to endure the humiliation of being arrested and charged. With no one else to turn to, Jordan rings her old friend and colleague clinical psychologist Tony Hill, the man she’s been determined to cut out of her life.

Hill does his best to force Jordan to tackle her problem, but she still has to face the prospect of losing her licence and gaining a criminal record. In an attempt to keep his friend’s mind of her disgrace, Hill manages to spark her interest in a series of cases where seemingly strong women were driven to suicide by vicious internet trolls. Tony’s forte is spotting patterns and there’s something about the cases that disturbs him, and he succeeds in piquing Jordan’s interest.

When a last minute – and decidedly unexpected - reprieve from conviction is offered, Jordan doesn’t hesitate, and takes up an unexpected offer from the Home Office, jumping back into the job she once loved, to run a major incident team with a regional remit.

The old partnership of Jordan and Hill is back to prominence in Splinter the Silence. Along with a bunch of hand-picked colleagues, including the tenacious and intelligent DS Paula McIntyre and computer expert DC Stacey Chen, Jordan and Hill delve deeper into the women’s deaths.

The scandal of cyber-bullying has been a hot topic in the UK recently after several tragic cases of teenagers driven to taking their own lives. In addition there have been numerous incidences of high-profile women being subjected to a torrent of rape and death threats on Twitter and other social media sites.

Val McDermid uses this background and delves skilfully into the dark world of internet bullies and trolls, adding her own grim twist by getting inside the mind of a killer who’s determined to prove to strong, independent women that their place is in the home, looking after their husband and children.

Amidst the plethora of serial killers books that flood the market every year, McDermid is one of the few authors who can still make me sit up and take notice. She produces a consistent quality of writing, plotting and characterisation that few can equal. The trick for me as a reader is to banish all thoughts of Robson Green from my head first!