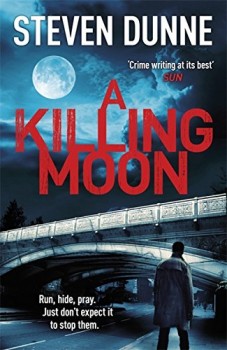 Weeks after the disappearance of an Irish student in Derby, the body of a Polish girl is found in the back of a burnt-out van. Detective Inspector Brook thinks the two are linked, but he has to navigate the complex world of organised crime in order to find out how.

There’s an idea in the movie business that all popular blockbusters have the same points on their timelines: scene setting, crisis, danger, the fake victory, the all is lost moment, the resurgence of hope, the grand victory. If the same is true in the book selling business, The Killing Moon would definitely fit the profile.

Woman are vanishing in Derby, European nationals who aren’t missed for weeks, sometimes months. Their accommodations are cleared out and cleaned, every trace of them removed. Brook and Noble, the interchangeable detectives, are looking into these cold cases when an Irish student, Caitlin Kinnear, vanishes without a trace after a night out with a friend in the city.

Then the body of a Polish girl called Kassia is discovered in the back of a stolen burnt-out van belonging to the owner of a Polish bar, a shady businessman by the name of Ostrowsky. Finally the detectives have a suspect. But there’s no evidence that Ostrowsky killed Kassia or abducted the other women.

All they know is that Kassia was pregnant, which leads them to a clinic where an anti-abortion lobby is holding fort, and where they finally find a connection between the missing girls. It’s a complex enough plot, and that’s before the involvement of Jake Tanner and his mentally ill brother Nick, Ostrowsky’s bisexual predator brother Max, or Father O’Toole, Zeke and Red. There are so many characters here, so many twists and turns in the plot, that maybe it shouldn’t be a surprise that the author has fallen back on stereotypes and traditional crime novel tropes.

I made it to the end of book with some difficulty, but kudos to the author for keeping so many plates spinning. Unfortunately, the climax is unsurprisingly predictable, with the traditional sacrificial newbie and the last minute arrival of the cavalry heralding the end of the investigation. The two lead detectives, Brook and Noble, have very little to distinguish them, and their Chief Inspector is the kind of man who tends to appear in the majority of crime novels – he rides roughshod over his staff and takes the credit for their collars.