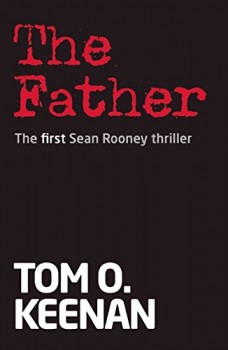 Sean Rooney, an alcoholic and mentally-disturbed former forensic profiler, is dragged out of retirement by his DCI ex-wife to help her solve the gruesome murders of a whole family.

Tom O Keenan packs an awful lot into his debut, an odd hybrid of procedural, the darkest of Scottish noir, political thriller, black comedy and bad B action movie which launches a series featuring the alcoholic and mentally ill former forensic profiler Sean Rooney. In fact, if anything he’s overdone it.

Rooney spends much of his time in internal conversations with a voice in his head, which at times takes over the narrative like some demented Greek chorus. This better self or conscience is meant to illustrate his continuing problems, but actually provides most of the humour in this introspective and deeply noir tale. No one can doubt Keenan’s authority when describing Rooney’s mental state. Years as a social worker preparing pre-sentencing reports for the Sheriff Court are reflected in his creation’s pathetic lifestyle.

From abused childhood to a glittering career that crashed in spectacular fashion to a sordid existence of drinking himself unconscious, waking in his own vomit and having soiled himself, then setting out to do it all over again is hardly the life of a hero. And that is one of the problems with the book. Not one of the characters is even vaguely likeable.

His ex-wife, DCI Jackie Kaminski, driven by an almost psychotic desire to be better than her chief constable father which leads her to disregard basic police procedures and even the law itself, is irritating and annoying. The politicians are corrupt, manipulative stereotypes; the gangsters so appallingly disgusting even Hollywood couldn’t have invented them. And the controlling and manipulative genius, a sort of McMoriarty, working off his resentment of his parents by organising increasingly large-scale killings by proxy, while sending out cryptic Latin quotations, indulging in ancestor worship and taking revenge for two centuries old land clearances, just doesn’t ring true. Nor did the setting. We know Glasgow’s tough, but this fractured, ultra-violent coliseum of death made Mogadishu look like Cheltenham on a quiet Sunday.

Rooney is dragged into the gruesome murders of a councillor and her family by Jackie and from there the story escalates through a disjointed series of improbable events which at one point sees the SAS employed as a near-private hit squad by a corrupt council leader. Despite the many killings, the reader knows who the instigator is halfway through the story, which begs the question why is he allowed to carry on?

But despite the questions and criticisms, this is a dark, disturbing and compelling exposition of the problems of mental illness and alcoholism, written with a hard edge that will keep you riveted to the page.