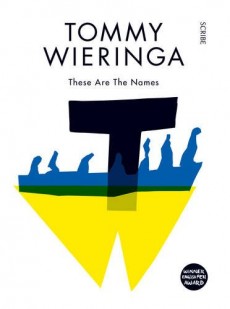 These Are The Names

Migrants end up in a small border town on the Russian steppes, where Police Commissioner Pontus Beg ponders his heritage.

When one of the last Jews in Michailopol dies, Police Commissioner Pontus Beg seeks guidance on burial rites from Rabbi Zalman Eder. The experience calls forth recollections of habits of his own mother; it seems Beg too may be Jewish. He starts to ponder the Torah and its lessons about life.

The story of a group of fifteen seeking to migrate, who put themselves in the hands of unprincipled people smugglers, is told in alternate chapters. After a journey hidden in a lorry, they are offloaded and told to walk west, but after days they are still on the bare Russian steppes, and the weakest start to die.

Eventually only five are left, skeletons hanging grimly on to life. Four are white: two men, a woman and a boy, and these start to regard the fifth, an Ethiopian, as an embodiment of devilish powers. By the time the four reach civilisation they are close to death, and their actions and thinking have become animalistic. Beg slowly unpicks their story.

This is an unsettling book, at once grounded in a fearful reality but at the same time dream-like. Michailopol is run entirely in the interests of those with their hands on the levers of power.  The police extort payment as a matter of course from motorists, or anyone else who can be squeezed. Even Beg, less rapacious than most of his colleagues, is brutal without compunction when his authority is challenged. Beg needs to treat Blok, the mayor, and his bullies circumspectly, but can demand a cut from Chiop, who has complete control of all the thieving in town.

The hard realities of life in Michailopol sound like luxury, however, when compared with the struggles of the would-be-migrants, who have been cruelly deceived and given guidance that almost guarantees a horrible and lingering death. Their predicament does not bring co-operation; quite the reverse, with every sign of weakness being merely an excuse for the others to fall upon the victim like wolves.

The horror is perhaps worse for the matter-of-fact way events are related. Indeed, Beg has a philosophical turn of mind and his speculations on what he reads and its application to life are often amusing. Rabbi Eder, the last of his kind, is diverted by the thought of a new co-religionist to conduct his funeral rites. However, Tommy Wieringa cannot resist mentioning the murder of 200,000 Jews and Red soldiers by Nazis, burned to hide the evidence to the extent that the land is saturated with animal fat residue.

Unlike some other investigative novels exploring the human condition, the prose moves ahead at a decent clip, and the author digs out some interesting speculations. The central theme of migrants might be considered topical. But unless you consider the worst in human nature an entertaining topic, you may find this a little dark.