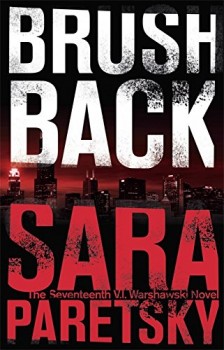 Chicago private investigator VI Warshawski is reluctantly drawn back to her old neighbourhood to investigate whether the unpleasant mother of a former boyfriend was framed for the murder of her daughter.

When you come to think of it, veteran Chicago private investigator VI Warshawski is entitled to be tired. We’re 18 books into the series, and Sara Paretsky has ensured that her lead character has aged, unlike Sue Grafton’s Kinsey Millhone, who is stuck in her own little time warp.

And that’s the problem with Brush Back – it all feels weary and slightly like the author and her lead character are going through the motions. Someone from VI’s past appears and wants her to investigate a family problem for nothing. Check. VI wants to have nothing to do with it. Check. Said family problem is linked somehow to VI’s darling mother. Check. VI reluctantly gets involved. Check. This involvement pisses off VI’s cop contacts. Check. Her reporter mate pisses VI off. Check. VI gets bashed about a bit. Check. Dr Lottie (who must be at least 110) rides to the rescue and is disapproving. Check. Mr Contreras downstairs chunters a lot. Check. And so it goes.

Amidst the usual formula, VI finds herself drawn back to her old neighbourhood at the behest of Frank Guzzo, a former boyfriend. Frank’s mother Stella has just been released from prison after serving time for murdering her daughter Annie. VI really doesn’t want to get involved, not least because Stella is thoroughly unpleasant. But she feels sorry for Frank, even though she can’t believe his claims that Stella was inncent. And was Annie the angel everyone made her out to be?

The book has bursts of excitement, but it’s slow going as all the tangled strands take an age to unravel, and the ending verges on home in time for tea. I shan’t be unhappy if we never see the tiresome Bernie, daughter of a former ice hockey star and friend of VI’s beloved cousin Boom Boom, again. There’s a limit to how much youthful expostulating and French-Canadian drama queening a reader can take!

Brush Back isn’t a bad book by any means. What makes this series important is Paretsky’s coruscating descriptions of decaying cities and neighbourhoods, all left to rot by the greedy power brokers. And VI, with her unconventional support network, is never less than an engaging lead character. But she carries the book single-handed. And Brush Back is really rather VI by numbers.