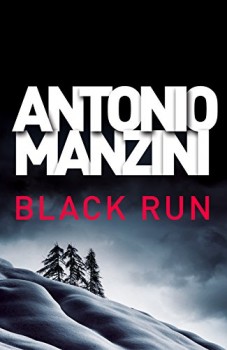 When a body is uncovered by a snowcat grooming the piste in Champoluc, cop Rocco Schiavone just knows the job is going to be a pain in the neck.

Deputy Police Chief Rocco Schiavone has blotted his copybook in Rome and been posted to Aosta, in the foothills of the Italian Alps. After four months he still knows little about his new patch, and after a late-night call is not enthused by the prospect of walking the Champoluc ski slopes to examine a mangled body exposed by a snowcat.

The corpse is soon identified from a tattoo as Micciche Pec, the owner of a popular local bar, a man with a beautiful wife, Luisa. She has some other male friends, so perhaps the death is a matter of jealousy, or maybe something to do with Micciche’s mafia-connected family. Certainly, however, with clownish subordinates, a boss at war with the press, and a combative examining magistrate, the task of unearthing the facts is going to be full of aggravation for Rocco.

Policemen in crime fiction are rarely choirboys; rubbing shoulders with criminals is bound to leave a mark, and often the interest in a detective comes from the moral compromises he makes, to a greater or lesser extent for the public good. Schiavone tends towards the disreputable end of the spectrum: he is violent, rude and foul-mouthed, smokes cannabis in his office, and freely engages in criminal activity if it will advance his professional or personal prospects.

Much of this is, of course, deplorable, although it is interesting how the recognition of inequity in the system of public justice seems to partially validate such behaviour. His appeal comes partly from an appreciation of the frustrations he faces: his displacement from his beloved Rome, the inadequacies of several of his staff, not to mention his Chief, but most of all from the inability of others to keep up with his quick thinking. At the same time he displays a stubbornness, as with his refusal to substitute practical footwear for his desert boots when tackling snowfields, which makes him somewhat endearing.

His direct approach to objectives, whether to crime-solving or his own welfare, also has its appeal. Schiavone follows the trail of evidence in the customary manner, offering minimal hints to Italo, the most promising of his subordinates, and to the reader, but enough that fans of the whodunit will not feel cheated.

Despite the controversial nature of the protagonist, the book has a light-hearted feel about it, with a comedic touch in many of the interactions. This might appeal if you like Montalbano, with the added advantage of not having an impossibly convoluted plot.