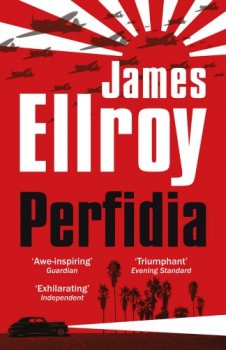 As tension in Los Angeles explodes with the 1941 Japanese attack on Pearl Harbour, its corrupt rulers bid to exploit the situation for their own profit.

We’ve waited five years for this veritable 700-plus page housebrick which opens Ellroy’s second LA Quartet series – and it’s hard to say it’s been worth it. For a novel said to be ‘historically dense and factually detailed’, it just isn’t.

The action is set in just 24 days in December, 1941. Two key planks of the background, European Jews in organised death camps and the shelling by a Japanese submarine of Goleta Inlet, came respectively after the ‘Final Solution’ Wansee Conference of January, 1942 and on February 23 of that year. Wolves in Ireland in 1921? Only out by about 150 years! The great Russian composer Rachmaninov – a virulent anti-Communist – at a ‘red’ Hollywood party?

So much for history!

The rest is pretty much Ellroy as you would expect: brutality, natural and unnatural sex, extortion, fear, corruption, eugenics, blackmail, back-stabbing, drugs, alcoholism and betrayal abound. His Los Angeles on the brink of war is the American nightmare writ large.

Nothing is sacred. Racism, sexism, religion, homophobia, all get a good airing. So does scandal. Every sordid rumour about real people – all conveniently dead to avoid libel – from John F Kennedy and his father Joe, through film stars, studio heads, musicians, writers, churchmen and politicians to Jewish gangsters, is employed to bolster this pointless horror.

Perfidia opens with a drugstore robbery and the murder of a Japanese family. Racial tension explodes into hysteria as the City of Angels faces black-outs – and its corrupt movers and shakers try to work out how they can exploit and profit from the situation.

A strange array of thin and one-dimensional other characters flesh out a narrow plot which takes hundreds of pages to develop, hampered rather than aided by Ellroy’s staccato, snarling style, which, once considered visceral and urgent, now appears increasingly pretentious. By the time it’s all improbably done, you will find it difficult to have the slightest sympathy with any of the protagonists – or any real interest in what happens to them.

Perfidia is certainly not Ellroy’s best. It’s rambling, exploitative and self-indulgent and – apart from the weight – all too easily put-downable.