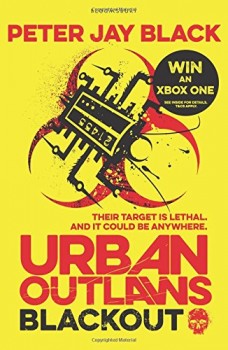 The Urban Outlaws are on the trail of a destructive virus, but some old enemies are determined to get to it before they do.

In their first outing, the Urban Outlaws, a group of youngsters living together in a converted bunker deep beneath London’s streets, were on the trail of the word’s most advanced computer. Now they’re back, and this time they’re in pursuit of a destructive virus that’s hopping from computer to computer, leaving chaos in its wake.

The action is fast and furious, taking off at a gallop with a tense opener that sees the Outlaws stranded in a lift when the virus knocks out a power station. With the police on their trail for breaking and entering, they manage to escape from the lift only to find themselves trapped at the top of a high-rise block. Jack, the 15-year-old leader of the group, hates heights and isn’t impressed when he realises what Charlie, their technical gadget expert, has planned to get them out of trouble, and for a moment, even getting caught seems a more attractive option!

Peter Jay Black introduces his characters in a series of textbook show not tell scenes. Jack, whose speciality is hacking, trusts his companions implicitly. Charlie is Jack’s second-in-command. She’s every bit as tough and resourceful as he is. Slink, whose real name is Tom Smith, is three years younger than Jack and Charlie, he’s in his element working at heights and seems to live for taking risks. Wren, the youngest of the Outlaws at ten, is very much part of the group now. She’s proved herself to be cool under pressure and is now integral to all their operations. Back at base is Obi, the 14-year-old surveillance genius, who directs his fellow Outlaws from the comfort of his computer chair, usually surrounded by his second favourite thing, food.

The Outlaws aren’t the only people trying to track down the virus. Some operatives from a shadowy government department, including the ruthless Agent Connor, their near-nemesis from the previous book, are after it as well, and they aren’t at all afraid to play hardball with a bunch of kids. When Jack and the group are forced by circumstance to team up with Hector, another hacker, tensions start to mount. Jack doesn’t like him or trust him, but the others are more welcoming, and – with good reason – Jack starts to feel threatened.

Blackout is a fast-paced, inventive and entertaining romp towards the younger end of the YA spectrum, with plenty of action to keep the pages turning. The Outlaws are all strong characters in their own right, each getting a chance to shine when the occasion demands it. There’s a strong story linking each book, but it would be no problem to read this as a standalone. The Outlaws are great fun.