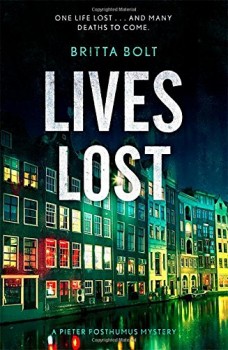 When a young man is found dead from a blow to the head, the woman who gave him shelter is arrested for his murder. But Pieter Posthumus uncovers a few details which tell a different story.

Pieter Posthumas (PP to his friends) works for the Amsterdam Lonely Funerals team, dedicated to ensuring even the poor and friendless get a decent burial. He is with friends at De Dolle Hond café one evening, when he is called next door where Marloes, the owner of a hostel, has found Zig, one of her charges, lying in a pool of blood.

Cleaning Zig’s room a few days later, he finds a piece of art which seems to have a connection to another young man’s death a few years earlier. He passes this information to the police, and is astounded when the police then arrest Marloes for two murders. His own unease at the way Marloes is being prosecuted, and prompting by his friend Anna the café owner, motivate him to look at the evidence in detail.

Part of this evidence is a series of paintings done by Zig over five years, pastiches of masterworks in the Rijksmuseum, showing the same subjects but two minutes after the originals. PP struggles to find the meaning of these works, which he is convinced hold the key to understanding the deaths.

This is the second book featuring PP and more satisfactory than the first, where there was perhaps a little too much going on. The action follows ‘only weeks’ after the first book and stays entirely with PP throughout, as he methodically explores opportunities to reach an understanding.

Despite the somewhat exotic location, PP’s community is a fairly small one, built around De Dolle Hond, which at times gives the feel of a village event: the nosy opinionated neighbours and the readiness of the group to extend help in times of emergency. PP’s slow working out of the circumstances also feels familiar; taken together one could see Miss Marple operating here very happily.

Under this cosy atmosphere, however, there is plenty going on of a darker nature, in particular the exploitation of women in De Wallen, otherwise known as the Red Light District. The authors convey very clearly that behind the saucy liberated image there is a wealth of sleaze, where women, particularly the young and vulnerable, are the victims of organised crime.

Britta Bolt is a pseudonym for a collaboration by two writers and in this book at least there is no sign of a join. The authors have found a good balance: an interesting location, a convivial set of characters and contemporary wrongdoings. Enough loose ends are trailed to herald sequels featuring events in De Wallen, where we have already been introduced to the villainous Henk De Kok, and the challenges posed by Muslim immigrants, expanding on the subject matter of PP’s first outing. This is definitely something to look forward to.