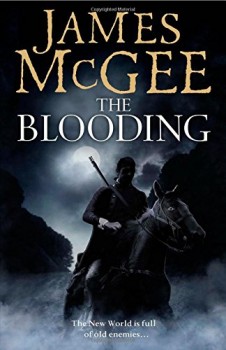 Matthew Hawkwood, former soldier, Bow Street Runner and spy, attempts to escape America, with which Britain is at war, but uncovers a plot to invade Canada.

Think Sharpe meets Bond in a remake of Last Of The Mohicans and you’ve just about got the plot, story and setting for one-time soldier, Bow Street Runner, and spy from the back streets of Regency London Matthew Hawkwood’s fifth – and best – adventure.

The year is 1812. Hawkwood has escaped from Napoleonic France, but his plan to return to England hits a snag when the only ship he can find delivers him to America – a country again at war with Britain after vacillating Presidents Jefferson and Madison find no other response to the Royal Navy’s policy of stopping American ships and impressing their crews.

Hawkwood is heading for British-held Canada when he rescues a fellow officer who has been taken prisoner and as the pair are chased towards the border they uncover details of a proposed American invasion which makes warning the British authorities vital.

Pursued by a relentless enemy and with winter closing in, they set off across the Adirondack Mountains – the land the Iroquois call ‘The Hunting Grounds’. They soon find they are not alone. From deep in Hawkwood’s past they uncover an old alliance – one that could save both their lives and turn the tide of the war.

The Blooding is part of a series with a running theme but, like the other books, works just as well as a standalone. Throughout Hawkwood’s past has been a secret, but this book fills in his spectacular backstory and does much to explain both his abilities and his attitudes.

America at the time is a closed book to most readers and McGee’s immaculate research and use of many real characters brings it to vibrant life – particularly the native Indian nations and their involvement in the war that was to lead to the creation of Canada as we now know it. His descriptions of the interaction between the various tribes and the major combatants brings the action to vibrant life – and if the story is literally splattered with gore and brutality from almost the first page, remember this was a bloody war, largely fought hand-to-hand, in brutal and unforgiving surroundings.

McGee has Bernard Cornwell’s knack of seamlessly blending fact and fiction: Sir John Johnson, Captain Scott and the wonderfully named Voltigeur officer, Lieutenant Colonel Charles-Michel d’Irumberry de Salaberry – whose spirit is kept alive by the ‘Van Doos’, the French Canadian Royal Vingt Deuxieme Regiment, one of the toughest and finest in the Dominion’s army – all played the parts he describes.

Equally the sickness and appalling conditions in General Dearborn’s camp on the Saranac River where hundreds died of cold and disease after the abortive 1812 attempt to establish a bridgehead to threaten Quebec are as accurate as history can make them.

One minor slip – Hawkwood is said to have learnt kung fu from an exiled Shaolin monk in London. The Shaolin temple was destroyed somewhere between 1647 and 1732 – take your pick from any of several dates, and only five monks survived according to legend. The art of kung fu did not even reach Japan until the 18th or 19th centuries, let alone London’s gutters!