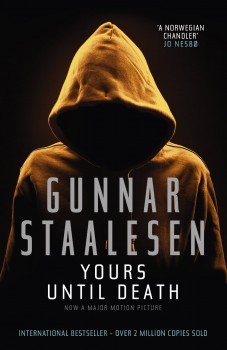 Varg Veum is a Norwegian PI with a sardonic manner, a fondness for the bottle and femme fatales, and a nose for trouble. When a small boy comes calling at his office, wanting to hire our hero to get his bike back, Varg finds himself tangling with a particularly nasty teenage gang.

If you think this sounds like a Scandi rip-off of Raymond Chandler, you'd be wrong. Staalesen provides a thick vein of melancholy running behind the dark humour, along with a very strong sense of place. Varg's Bergen is dark and sinister, with louring mountains and soulless blocks of flats. The gang, who come over like a substantially nastier version of the kids in Lord of the Flies, hang out at a deserted hut amongst the trees.

Varg (which apparently means outlaw) comes out on top at their first encounter and retrieves young Roar's bike. But this isn't just petty larceny - the gang are preying on the single mothers who live on the gloomy estate. And what makes them so frightening is the casual way they resort to violence. Once Roar's pretty blue-eyed mother Wenche is involved, and Varg finds a man with a knife in his back in her flat, he's in over his head.

Staalesen's cast shows the daily grind of those struggling to survive. Even the one or two folk from higher up the pecking order have secrets they'd rather not have spread around the place. And everyone that Varg encounters, from police and medical staff, to those he's questioning, seems terminally miserable.

And in case you're thinking that the book is 21st century angst, it was written in 1979 and seems spookily prescient in its portrayal of disenchanted youth. Small indie publisher Arcadia Books are introducing Staalesen to the English-speaking market. Apparently there have been 12 film adaptations of his Varg books since 2007 - and the novel certainly has a cinematic feel to it.

This is a book to read with the lights on. What makes it so menacing is the everyday feel to it, and the ordinariness of the people Varg encounters. Our hero is stubborn but likeable, the kind of bloke you want on your side, even though you know trouble follows him around. Margaret Amassian's translation is relaxed and colloquial, and really showcases an outstanding book that is more than your common or garden Nordic Noir.

If I had one tiny criticism, it would be that our battered hero is too much of a superman, given the violence inflicted on him. He's knocked down and gets back up again with greater regularity than a Chumbawamba song! Anyone else would be supine for days after the attentions of Bergen's lowlife.