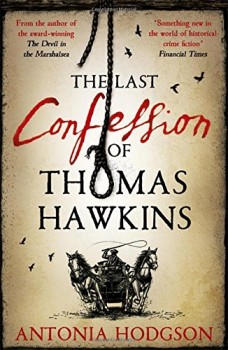 The Last Confession of Thomas Hawkins

Gambler and rake Tom Hawkins has survived Marshalsea prison only to be convicted of a murder he did not commit. He’s mixed up in the affairs of two ‘courts’, that of George II and the criminal overlord of London’s grim St Giles. Can any of his friends or patrons save him?

Antonia Hodgson’s sequel to her debut novel The Devil In The Marshalsea, is every bit as well written, historically accurate, always just on the right side of convincing and an often quite chilling view of the seamy side of the early 18th century – with all its uncomfortable parallels with the modern day.

Set in London in 1728, Norfolk parson’s son Tom Hawkins has escaped the grim debtors’ prison to resume a life of gambling, drinking and fast living, tempered only by his relationship with the beautiful Kitty Sparkes.

Kitty, twice the brains, business sense – and temper – of her good looking, romantic but often horribly naive lover, has inherited a bookshop which does much of its business under the counter to boost the libidinous imaginations of the wealthy and aristocratic.

Moral puritans want the shop closed and Hawkins, who translates many of its bestsellers from the original Italian – much more sexually relaxed there  – arrested.  Then their next-door neighbour, a leading light in the Society For The Reformation of Manners, with whom Hawkins has quarrelled, is murdered and suspicion points squarely at Tom.

Meanwhile, through James Fleet, the uncrowned king of the St Giles rookeries, London’s heart of criminal violence, whose half-brother was the devil in the Marshalsea, Tom has been conned into employment as an agent by the powerful and manipulative Queen Caroline to deal with the marital problems of Henrietta Howard, one of her ladies – and her husband King George II’s mistress.

Tom is out of his depth, unable to prove his innocence by solving the killing, or earn the Queen’s gratitude by fixing what threatens to become an embarrassment – and swept inevitably towards the hangman’s noose.

This is a terrific adventure story, full of larger-than-life characters, one that at times stretches credulity to remain on the side of credibility. Hawkins, for all his bravado, is an innocent, duped and exploited. As Fleet’s withdrawn but streetwise son Sam says, this ‘half-rogue’ would have made an excellent parson.

Hodgson’s London is a cross between the journalistic realities of a later chronicler in Charles Dickens and the bawdiness of Henry Fielding’s Tom Jones, with more than a hint of one of Hogarth’s savage cartoons.

She has a feel and understanding for how people thought and a broad enough mind to chronicle rather than sensationalise its excesses. It is a place and time not so different from our own which reminds us at we may not have progressed so far from its grim world of debtors and creditors, the super rich and grindingly poor, all sorts of avarice, betrayal and crime, bizarre sexual appetites and easy gratification.

This magnificent story with its multiple twists and turns, part social history with an informative afterword, an exploration of many faces of evil, with a genuine romantic hero and heroine, is a book to linger over.

Hawkins is a great narrator, Kitty a very strong female lead – every man should be so lucky – together with a powerful supporting cast and cracking dialogue, they make a winning couple in a vivid period setting. Tom Hawkins is too good a character to abandon and I await his – and Kitty’s – return.