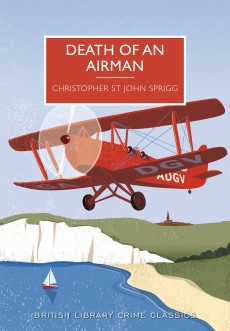 Death of an Airman

An Australian bishop, on leave in England, decides he must learn to fly to get around his huge bush diocese. When an instructor crashes and is killed he suspects there is more to it than accident and with the help of a local policeman and a Scotland Yard detective, uncovers an international drugs ring.

Few readers will have even heard of Christopher St John Sprigg, the brilliant young novelist, aviation writer and Marxist convert who was killed fighting with the International Brigade in Spain in 1937. This book, of which few original copies even exist, was published three years earlier, yet is surprisingly modern both in content and context. It has been resurrected by Martin Edwards as part of the British Library’s crime classics series, and is well constructed, interesting and detailed with, for its period, an unusual and almost prophetic, storyline.

Australian bishop Edwin Marriott, on leave in England, decides he must learn to fly to get around his huge bush diocese. When an instructor crashes and is killed he suspects there is more to it than accident and with the help of a local policeman and a Scotland Yard detective, uncovers an international drugs ring. That’s the plot in a nutshell, but there is so much more to enjoy in this clever crime and murder mystery.

Marriott, the Bishop of Cootamundra, is no Father Brown. He may launch and end the story and use his quiet intelligence to offer useful suggestions to investigating officers, but it is the combination of police procedure, diversion of attention, crisis and murder that makes the story so effective. It also brilliantly captures the atmosphere of the 1930s explosion of civil aviation. At a time when distance and endurance records were being broken by both men and women – think Lindbergh or Amy Johnson – commercial air services were expanding, and flying for pleasure, if you had enough money, was becoming increasingly popular, it truly captures the spirit of the age.

This emphasis on the necessary finance also allows Sprigg to poke fun at the English upper class, producing some near-classic caricatures in a sort of Bertie Wooster meets Biggles environment.

The book is a little slow in places, but more than well worth persevering with. The two police inspectors, the local man Creighton and Bray, charged with investigating the increasing import of cocaine, are surprisingly open-minded and modern as they plunge into a maze of murder/suicide scenarios. Bring the situation forward 80 years, throw in a few more corpses and set it in Glasgow and you could be talking polite noir!

Many of the other characters are memorable in the own way. Aero club manager Sarah Sackbut, driven almost to distraction by the antics of her instructors, pupils and well-meaning but interfering supporters, stands out enough to attract the bishop's attentions in not quite a spiritual way and some of the smaller supports, with their petty jealousies and feuding, help build a convincing atmosphere.

Amid the confusion and mayhem there are plenty of genuinely funny moments. This is a book to enjoy – and to ponder a little what Sprigg could have achieved if political conviction had not led him to an early death.