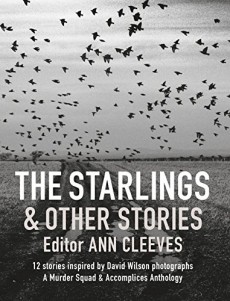 The Starlings & Other Stories

by The Murder Squad and Accomplices (edited by Ann Cleeves)

The Starlings & Other Stories brings together 12 crime writers to produce a collection of short stories all inspired by a series of starkly evocative black and white photographs by Welsh photographer David Wilson.

The idea of using a photograph to inspire a story is one that’s always fascinated me. No two people ever react alike to the same source material, as this book ably proves as Through the Mist by Martin Edwards and House Guest by Helena Williams are both based on the same image of a huddle of rundown farm buildings set against the large and cheerless backdrop of a hillside shrouded in low cloud. The first is an eerie tale of obsession with a dark past bleeding through into the present, with a cast of grim, taciturn locals. The second is a very modern story of spin and deception, with a wholly unexpected twist in the tail.

Homecoming by Cath Staincliffe exposes the pitiless morality characteristic of some small, claustrophobic communities and whilst Mary Sharratt’s Sirens seems to bear only the most tangential resemblance to a photo of birds in flight amongst skeletal, leafless trees, she provides a haunting look at the deeply-held prejudices of the past against those perceived as being different in some way, and therefore dangerous.

Dark, forbidding cottages figure highly in David Wilson’s work, inspiring such diverse works as The Wizard’s Place by Chris Simms, in which an intended trap has dangerous and unexpected consequences, and Toby Foward’s Sorted, which takes a grimly humorous look at the growth area of online sexual revenge.

The sea plays an important part in the collection of Pembrokeshire photographs. In The Man Who Didn’t Breathe, Jim Kelly will probably put off a few would-be surfers, and Margaret Murphy’s Port Lion provides an equally salutary and rather spooky take for those like me who enjoy wild swimming!

Mountains Out Of Molehills by Valerie Laws is a modern morality tale for anyone thinking of trying to have the best of both worlds when it comes to relationships and sex and in Secrets, Kate Ellis ably demonstrates that it’s wise not to take things at face value, even when you think you know what’s going on.

Editor Ann Cleeves takes us away from Wales for a while, with her well-known character Vera Stanhope. Here, the down-to-earth inspector has to take a look into the darker side of her own family’s past against a backdrop of the obsessive and illegal collecting of rare birds’ eggs. Christine Poulson’s Weeping Queens brings the collection to a close with another short, sharp look at dark doings on the seashore.

The stories are all clever, well-written and darkly entertaining. My only quibble with the collection is one of presentation rather than content. The otherwise excellent production values are somewhat marred by the decision not to use justified text. The ragged right edge gives a faintly home-produced air to the book, wholly at odds with the excellent reproduction of the photographs themselves. But that’s a very minor issue in what is an otherwise extremely admirable and unusual collection of stories that transported me effortlessly to the wilds of Pembrokeshire, an area both beautiful and bleak that provides a vivid backdrop to a collection of stories which will appeal to anyone who likes a sharp, dark edge to their crime.