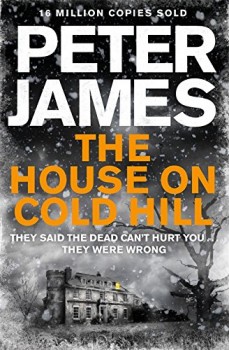 The House on Cold Hill

Ollie and Caro Harcourt buy a dilapidated mansion in the Sussex countryside. But it soon becomes apparent that the house has a sinister history and somebody or something doesn’t want them there.

The early books in Peter James’s Roy Grace series lurked around the edge of woo-woo at times, so it’s no surprise that our man can turn out a chilling page-turner. The House on Cold Hill should sound a hearty warning to all those people who reckon they can buy and renovate old houses - so beware if you spend too long watching Homes Under the Hammer or Escape to the Country!

Right from the start we discover that the aforesaid house in the Sussex village of Cold Hill is bad news. And it’s no surprise when the terribly enthusiastic young couple who see it as their dream home encounter a damn sight more than things that go bump in the night.

Ollie and Caro Harcourt have sold their home in Brighton (Hove, actually – and Ollie really does say that at one point!) to buy the rambling, dilapidated Georgian mansion. Teenage daughter Jade isn’t so keen on being separated from her friends, but she starts to think that maybe her huge bedroom and the house might be rather cool.

But then one of Jade’s friends sees a nasty-looking old woman in the background when they’re chatting on FaceTime. There are more sightings, and strange happenings in the house. And web designer Ollie rapidly discovers that working from home isn’t a great idea.

I usually steer clear of horror fiction – the nearest to woo-woo I get as a rule is Phil Rickman. But James is a consummate storyteller who manages to make the eerie feel like the every day. His village and its eclectic inhabitants seem all too real. I made the mistake of devouring the book late at night – and then having very bizarre nightmares about big houses!

In some of James’s Roy Grace books, I haven’t always cared much for his young, middle-class professionals, who tend to blend into one after a while. But Ollie in particular comes across as a realistic bloke – the sort of guy who’s tipped his life savings into an enterprise because he’s convinced it’ll be the best thing for his family, and who is determined to see the saga through. And the cameos from a couple of elderly villagers have really stuck in my mind.

As for the ending … I am still undecided, a week after finishing the book. One neat little twist had me nodding. The actual ending, though, has a slight feel of a cop-out. But your mileage may vary.