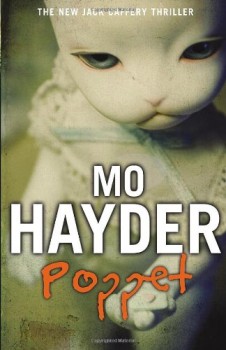 A series of horrifying, possibly supernatural, incidents shake both patients and staff at a secure mental unit. DI Jack Caffery, still looking for the body of a missing woman, is dragged into the hospital mystery.

Where Stephen King leaves off, Mo Hayder starts. In the sixth of Detective Inspector Jack Caffery’s adventures, the queen of macabre crime returns to the edgy and less easily defined atmosphere and plots of her early books. Set in a secure mental institution, this atmospheric and creepy tale of insanity and death is reminiscent of some of the better Hammer Horror films. This updated version uses one of the film-makers’ stocks in trade – the poppets of the title, small human figures used in witchcraft – but this is far more realistic and frightening than anything to emerge from the Bray studios.

Poppet is written entirely in the present tense, which some readers may find off-putting, but here it does add real immediacy. The story almost relegates Caffery, an often disturbing character in his earlier appearances, to a near supporting role. The long-running saga of Sergeant ‘Flea’ Marley and the disappearance of model Misty Kitson continues and Caffery’s solo detection work is still impeccable, but don’t worry if you haven’t read any of the earlier stories – this exploration of the darker recesses of the human psyche is easily powerful enough to stand alone.

The real hero of this horrifying tale is AJ LeGrande, nursing coordinator of the secure unit, cider nut and a genuinely sympathetic, if slightly unsure personality. Some of his patients have committed awful crimes, but he doesn’t want to know why they are confined and treats them all with dignity and respect. When the patients – and some of the staff – begin to worry about being haunted by a spectre they call ‘The Maude’, AJ tries to investigate, but things rapidly deteriorate with patient deaths and disfigurements. Is something otherworldly responsible or could the answer be closer to home? Lost in an apparent unsolvable riddle AJ turns to Caffery who he has met through police-hospital liaison conferences.

AJ is a wonderful character, standing for all that is best in the NHS and trying to care for his charges in the face of budget cuts, lack of staff and inadequate facilities. The portrayal of some of the lesser characters – particularly ‘Monster Mother’ who believes she has given birth to every patient and staff member in the unit – is no less effective for its uncanny realism. The plot races along, twisting and turning through varying degrees of horror and human emotions to leave you guessing until the final pages. If there is a weakness at all, it’s in the final two chapters, but after such a diet of horror and depravity, it’s probably nice to realise that normal life continues.

All round, Poppet is a great, if disturbing read. This is Hayder back at her very best, but if you’re of at all a nervous disposition, don’t read it before you sleep. It’s the stuff of nightmares!