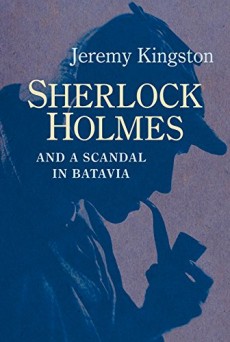 Sherlock Homes and A Scandal in Batavia

Holmes and Watson are begged by Prince Alexander, heir to the Dutch throne, to investigate his fears of a plot to steal his inheritance and an attempted poisoning.

Benedict Cumberbatch has a lot to answer for! His unrealistic, modern, sensationalist and frankly silly, portrayal of the Great Detective for TV has sparked a scramble for new – and often totally unbelievable – adventures for Arthur Conan Doyle’s creation by a variety of authors.

Latest to join an ever-growing list is Jeremy Kingston, a playwright, poet and critic. His debut is a beautifully written, cleverly plotted story of royal inheritance, ambitions and international politics – and a timely reminder that history constantly repeats itself.

American money buying Russian guns for Irish terrorists is an all-too recent scenario – and one which may yet not be entirely solved, despite John Watson’s pious wishes and the efforts of several British governments. Holmes and Watson are visited by the reclusive Prince Alexander, only son of the Dutch King, who despairingly tells them of a plot to steal the throne, a failed marriage proposal, and an attempted poisoning. The pair enter a world of power, dynastic and international political ambition, played out against a background of top London and continental hotels and stately homes – and soon discover that it is not only the throne of the Netherlands at stake.

Kingston weaves together Fenian bombs in London, the extinction of the male line of the Dutch royal house and the death of Queen Victoria’s favourite son, the haemophiliac Duke of Albany. His comprehensive appendices hint at a far more serious constitutional problem. The legitimacy of Princess, later Queen Victoria, great, great, grandmother of our present Queen, as a royal succesdor is called into question.

Evidence for this is based largely on the early life of her father, the Duke Of Kent, and the fact that so many of her descendants in various European royal families suffered from haemophilia. It’s a fascinating twist in a clever – and very readable – story and, even amidst the glut of Doyle imitators, an outstanding book.