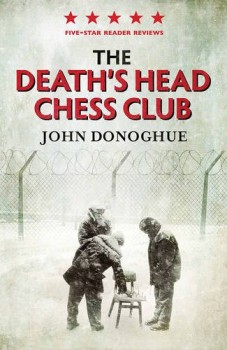 An SS officer’s attempt to boost morale among death camp guards leads to an impossible friendship which bears fruit many years later.

It’s a brave author who chooses Auschwitz as the setting for his debut novel. That John Donoghue applies the twisted logic of the beasts of the SS to triumph over an unlikely plot and produce a moving and poignant story of forgiveness and redemption is a tribute to both his skill as a writer and understanding of the human mind after many years working in mental health.

Apart from being based in one of the greatest crimes in history – more than a million people, mostly Jews, were systematically destroyed or died of exhaustion, starvation or illness in the three camps of the Auschwitz complex in just four years – there is little to tie his story to the genre. In this hell of industrialised death, savage beatings and offhand murders for ‘offences’ like a missing uniform button seem almost insignificant.

Senior Waffen SS Lieutenant Paul Meissner is sent to Auschwitz after being injured in Russia. Ordered to improve troop morale, he decides to start an all-ranks chess club. Competition, led by gambling, becomes fierce, but when rumours of an ‘unbeatable’
Jewish prisoner reach the camp hierarchy, the Nazi ideological myth of racial superiority is at stake.

Auschwitz, as always, corrupts everything and the Jew is allowed to play his jailers, with the added edge of another prisoner’s life depending on the outcome.

Fast-forward to 1962 and the Jew, the legendary Watchmaker of Auschwitz, Emil Clement, is playing in a tournament in Amsterdam. His first opponent is a wartime Nazi propagandist, unrepentant about his past. Clement, who lost his wife and two sons in the hell of the camps, cannot – and will not – ever forgive or forget. For him there can never be such a thing as a ‘good German’. The two are brought together by a dying Meissner, who has sought to expiate his own guilt as a Catholic missionary priest and bishop, and in re-exploring their past, all three are allowed to come to terms with it.

This original and daringly imagined story examines the guilt of the survivor as well as
the perpetrator, and the possibility that diametrically opposed enemies can somehow achieve an unlikely understanding, even friendship.

If you can get over the central point, that Nazis would ever allow a Jewish ‘sub-human’ to compete on equal terms, it is a brilliant and inspiring tale of hope. Donoghue has magnificently avoided the danger that a work of fiction might trivialise the horrors of Auschwitz. The camp scenes are shot through with a brooding undercurrent of desperation and fear and are all too brutally real.

The chess is almost incidental; it merely adds colour. But to compare the construct to a game, Donoghue opens almost tentatively, develops a strong and decisive middle game and drives on to a satisfactory ending. He writes well. Some of his characters are real, others based on historical fact. All are well developed and utterly believable. He has clearly carried out a major amount of research ­– even the footnotes, something almost unheard of in a work of fiction, contribute to the reader’s overall understanding.

I hate to use the word ‘worthy’, but this book is just that. There is no attempt to either sensationalise, or avoid, the horrific facts in a story which delivers such a positive message. It will keep you gripped to the very end. It should also become a standard textbook for secondary schools to make new generations aware of its horrors ­– and the true meaning of reconciliation.