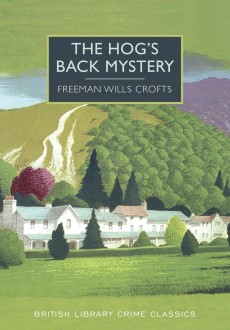 The Hog's Back Mystery

At 8:30 one evening, Dr James Earle goes into his sitting room to read the paper and disappears without trace. The baffled local police call in Scotland Yard and Inspector Joseph French arrives to solve the mystery.

Julia Earle, living near Farnham in Surrey, has invited her sister, Marjorie and an old school friend, Ursula, to stay a few weeks with herself and her husband, Dr James Earle. It becomes clear that all is not well with Julia's marriage. Could she be having an affair with a younger neighbour or is her husband the one having an affair? The marriage is going to be put under a spotlight because, a few days into the visit, Dr Earle vanishes from his house, as quietly and completely as though he had been spirited away.

When the local police are unable to find Dr Earle or any plausible reason for his disappearance they call in help from Scotland Yard. Thus, Inspector Joseph French arrives on the scene. It soon becomes clear that this is not a simple disappearance; another woman has gone missing in the area. Is this murder, or an affair? French has to puzzle through a tangle of alibis, clues and lies to get to the truth.

Freeman Wills Crofts was a crime writer during the 'Golden Age' of crime fiction. And this book is very much set in that era; middle class people in the mid-war years. There are maids, cooks, drivers and gardeners to interview. Chemists make up powders according to doctors' individual recipes. French rarely travels by car, but uses trains, bicycles and his own feet as he traces the crime around the Hog's Back hill.

Crofts was also a member of the Detection Club, and one of the tenets of that body was that the author should 'play fair' with the reader so that they could solve the puzzle from the information presented in the book. And this book is very much a puzzle. There are no deep, psychological insights into the human condition or the criminal mind to be found here. Indeed, it does not seem that Crofts is particularly interested in the personalities of the people involved. I felt I knew as much about a clue-bearing chemist as I did about the main players. It turns out that the murderer has the simplest of motives, but a very complex means of achieving it.

Did Crofts play fair? Yes, and to prove it page numbers are provided when French is explaining things. I did not solve the crime, only spotting one dodgy alibi and the body disposal site. In my defence, the explanation requires (and provides) a timetable of the suspects’ whereabouts and a map showing their movements.

I enjoyed this book, and it's worth reading just to see how far the genre has developed since it was written.