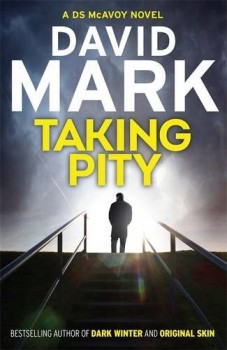 Detective Superintendent Trish Pharaoh is hoping that a power struggle between criminals in north east England will give her the opportunity to take a few down, while DS Aector McAvoy tackles a very cold case.

Crime in Newcastle and the north east has been dominated for decades by Francis Nock and his enforcer Raymond Mahon, but a new firm from the South, the Headhunters, is muscling in on established territory. The head of Humberside CID’s Serious and Organised Crime Unit, Detective Superintendent Trish Pharaoh, is looking for local fall-out from the dispute which would give her a way in.

Her Detective Sergeant, Aector McAvoy, is still recovering from the explosion at his home after a brush with the Headhunters, which resulted in injury to several officers in the unit. His wife Roisin and youngest child have been unofficially spirited away for safety by Pharaoh, leaving McAvoy with Fin, his five-year-old son. To keep him out of trouble, Pharaoh has assigned him to a cold case, the multiple killing of a family of four in 1966.

This fourth DS McAvoy novel is told in the present tense throughout, seen from the perspective of Pharoah, McAvoy, and other officers current and retired, and sometimes from that of Mahon and other criminals. It builds from the characters and storyline developed in the earlier books, but makes complete sense read alone. All the action takes place in or around Hull, and there is plenty of local detail about locations, the accent, and culture of the natives, which gives the book a very strong feel of place.

The book is as gritty a portrait as you are likely to find of crime and policing in UK. The criminals are nasty: even Mahon, who has a philosophical turn of mind, perpetrates horrific injury without qualms where the interests of his boss are concerned. The Headhunters’ favoured weapon for persuasion or punishment is the nail gun. The police are a mixed bunch, some like McAvoy entirely honest, a few corrupt, and the majority accept as inevitable the compromises they have to make to get a result.

The story is well-paced, taking the reader quite a way into the book before clear outlines become visible of who is doing what and why. The cold case strand similarly seems a complete riddle until McAvoy’s chance meeting with some very minor villains gives him the key he needs to unlock a tale kept hidden for nearly 50 years. As events spiral to a conclusion the threads are drawn together and the links between them become clear.

Certain aspects of the story seem a little difficult to swallow wholesale, in particular the penetration of such tightly-managed crime groups, and the continuing interest of retired police officers in an active role. Overall, though, the book puts forward a pretty convincing, if rather dark, view of policing in a provincial city with its own distinctive characteristics.