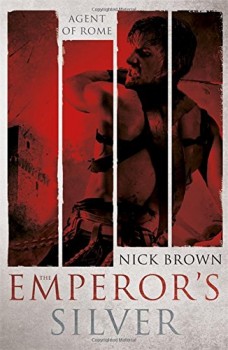 Roman investigator Cassius Corbulo, his bodyguard and Christian slave must track down a gang of counterfeiters threatening the economic stability of the Empire.

Cassius Corbulo is now into his fifth adventure as a Grain Man – an agent of Imperial Rome. But the young Cassius doesn’t really cut it for me. For a start, he’s a wimp. Every time we get down to serious physical action, he falls short, relying on his bodyguard, the former gladiator Indavara, to bail him out. And given his background, he also has some surprisingly PC views.

Junior officers – the army equivalent of his rank would be a junior centurion – don’t change much over the centuries. A young Roman would largely think of wine, women and getting his foot on the cursus honorum, the route to promotional and political rank and be rather less concerned with the rights and wrongs of colonial government or the moral welfare of his Christian slave Simo.

Where Nick Brown does have him bang to rights in his total inexperience. He seems to have absorbed little from his earlier scrapes and reminds me of a young lieutenant of my acquaintance who ordered his platoon to fix bayonets and advance in spaced line abreast through jungle so thick normally a team of cutters had to hack a path! That young man went on to become a successful and respected intelligence colonel, so perhaps there’s hope for Corbulo yet!

But generally he fails to grab the imagination. Far more interesting and effective are memory-damaged ‘terminator’ Indavara, killing by rote and battling anger issues while seeking some sort of identity, and the convincing man of peace Simo, facing all the problems of early Christians in a society where the emperor is regarded as a god!

Corbulo’s last outing had brought his name to the ears of Marshall Marcellinus, effectively the Emperor Aurelian’s deputy, who despatches him to Roman Syria to solve the problem of a ring of counterfeiters whose output is so prolific it threatens to destabilise the whole shaky Roman economy. Starting his quest in Tripoli, Corbulo, by trial and error, links the ring to a base in Beirut. Civil unrest, uncooperative local officials and some poor luck or timing, plus determined and lethal efforts by the forgers thwart his efforts, but he at least achieves part success.

Brown’s descriptions of the awful inequalities and casual brutalities of Roman colonial rule and a marvellous picture of an always volatile, but fascinating Beirut provide a compelling background to some slick, if rather less than graphically bloody action as Indavara despatches opponents like squashing flies.

There’s the obligatory sex too, with brother and sister counterfeit bosses involved in an incestuous relationship and plenty of randy soldiers. It is the cleverly drawn and developing relationship between the three men which anchors the other elements in a well-rounded and entertaining story.

But altogether it’s rather too slick for me, although the ending nicely sets up a hook for the next instalment, in which the mystery of at least part of Indavara’s background looks likely to be solved.